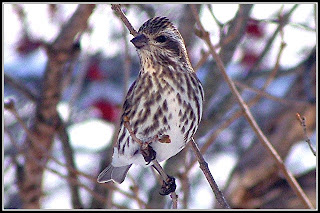 Although not a frequent visitor this winter, we did have a few visits from a female Purple Finch last week.

Brrr.. Will Spring Be Here Soon? 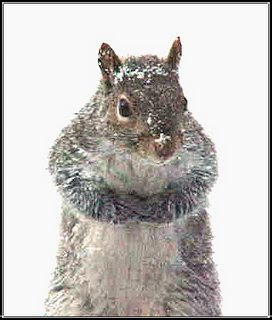 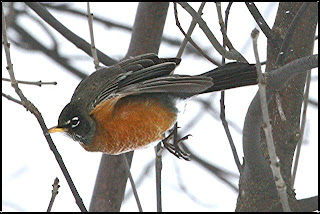 While driving along Rothesay Ave this afternoon, near Renforth, I saw a bird fly across the highway in front of my car and it looked like it might have been an American Robin! We decided to turn around and see if we could relocate the bird to confirm our id for we have not often seen Robins at this time of year. 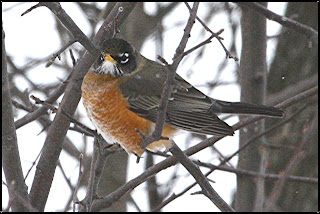 After turning, but not having driven back as far as the location of our original sighting , we saw another red-breasted bird fly across the road. Was this the same bird or maybe there were two Robins? We had seen where the second bird had landed and so I got out of our car, crossed the highway, and captured a few pictures; thus confirming our sighting of an American Robin in February. 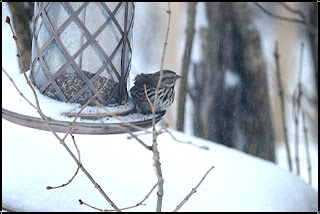 This over- wintering Song Sparrow surveys its snowy world in our feeder area. 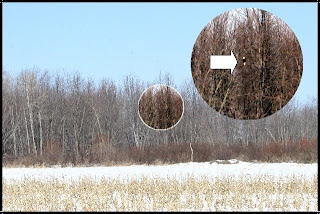 While driving along highway #105 near Sheffield we noticed what may have been two clumps of snow high up in the trees bordering the fields along the highway; or perhaps it was the white head and tail of a Bald Eagle? We stopped to get a better look, and confirmed with our binoculars that it was a Bald Eagle.The smaller circle in the photo above indicates where we saw the eagle. The larger circle with the arrow shows an enlarged view.

Just as we stopped a murder of Crows arose from the remnants of a corn field beside the highway and headed off in the direction of the eagle perched in the tree. 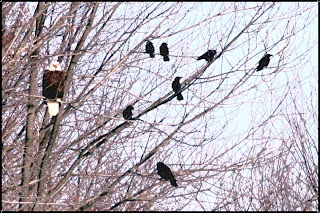 A murder (or group) of noisy Crows can sometimes draw your attention to an Eagle or Owl in the area; so if might be worth your while to follow through and check out the focus of their activity. 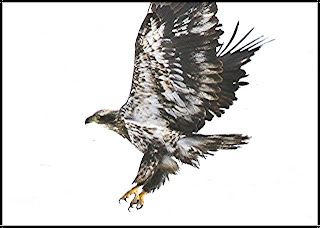 Yesterday, while driving east, along highway #1 at Saint John we saw a very large bird feeding nearby the sewage lagoon in that area. We did not identify it immediately; but as the huge bird 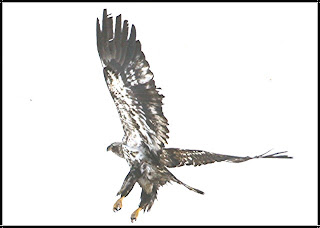 lifted its wings in flight we could easily see the white mottling on its belly and under- wings and we could see that it was a second or third year Bald Eagle. 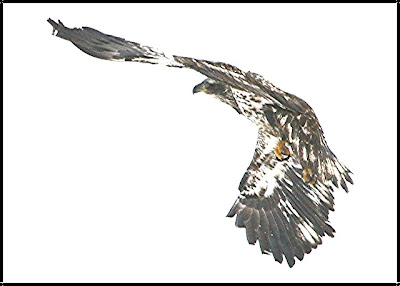 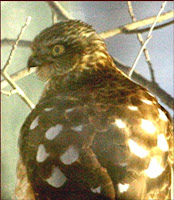 This yellow-eyed, juvenile accipiter is either a Sharp-shinned or Cooper's Hawk. And it probably would have an interesting tale to tell for the bottom feathers on its tail were rather crumpled and frayed! The condition of its tail feathers make identification of this accipiter a bit more difficult. 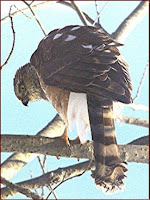 and Sharp-shinned is size. This hawk was quite large; larger than the usual Sharp-shins that I see occasionally in our feeder area. As well as its size, and dubiously rounded tail; its head, when seen in profile, seemed rather flat. A flat, rather than a rounded head, is also a sometimes mentioned characteristic of a Cooper's Hawk.