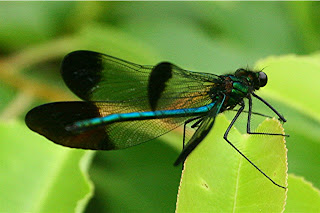 I think this is a real gem of a picture; or rather I should say 'jewel' for this is a male River Jewelwing Damselfly. Some damselflies are not so easily identified but this Jewelwing has its own unique appearance. The black on the hindwings is about a third of its wing and the forewings have a lesser amount of black. Also its long black legs have prominent spines. Its body is a bright metallic green but sometmes appears blue depending upon the lighting where it is found. 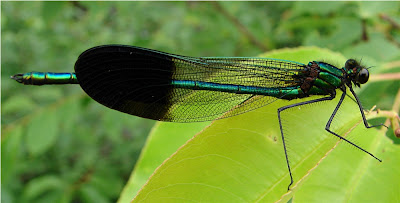 Damselflies are insects of the Odonata group; as are dragonflies as well.

What great pictures! They look like something out of a science textbook!

You know, Nature Lover, the outdoors and the magnificence and beauty of it is my own personal science guide; encouraging me to create and share photo pages of each unique nature encounter.