This post on Red Crossbills was first posted on January 14, 2009. Today I am reposting it for Ruby Tuesday. To view more posts on this 'red(ruby) related theme, please scroll down the righthand side on this pageand click on the Ruby Tuesday badge or you may want to post your own contribution. My Thanks to Mary for hosting this meme. Happy Ruby Tuesday to all. 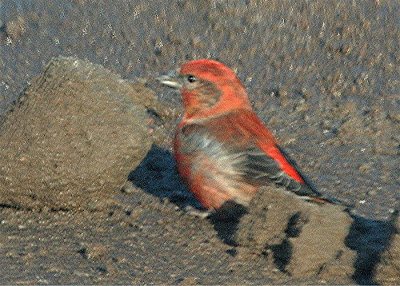 It really would be more fun sometimes, when writing posts, to not give away the name of the bird until the picture has been shown and the viewer is trying to guess, "What is it?" But having learned that a simple, naming title works best for those searching for particular species, and also for my own reference too, I always fall back on my ingrained school teacher habits of trying to be clear and specific. 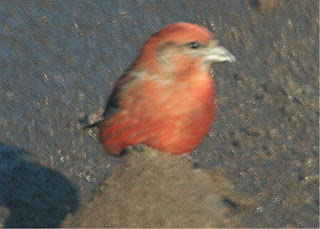 This little bird would have been a fun one to play with for at my first glimpse I wondered initially myself; a male Purple Finch maybe? But I dismissed that right away for I haven't seen any Purple Finches lately and actually Crossbills was a species I have been hoping to see this past while. He, this male Red Crossbill, is not a common sighting to me, but other winters, around this time of year, I have seen them along roadsides before. 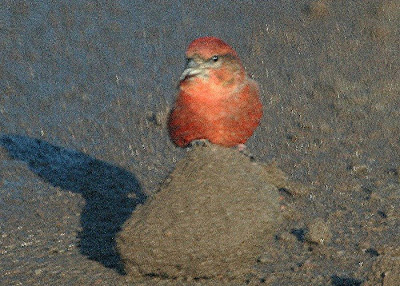 I had decided to take a drive into the city yesterday morning to get a couple of needed items high on my priority list; such as brown thread to finish a Starling wall hanging I am working on, and some watercolour supplies, so I can get started on a Bohemian Waxwing painting that I really want to do. Just a few kilometers from home, I almost didn't see this little, bright, red bird until I saw if fly upward suddenly from a clump of slushy build up on the road that had dropped from a car. 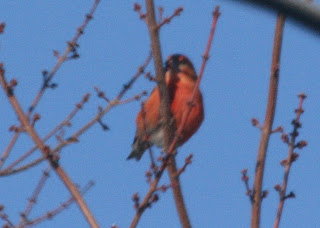 Taking just a couple of seconds, and a few meters up the road to decide, I knew of course that I would turn and go back to see if I could find it again. Returning to the spot on the road where I had seen it, I scanned the trees and immediately saw it 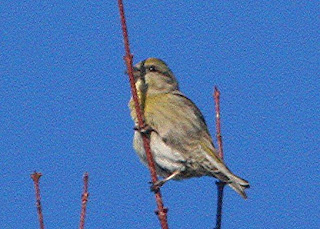 s bright, red presence! Then to my great luck, and delight, it flew onto the road again and I was able to quickly snap the photos which I have shown above, through my windshield. Also I saw a second Crossbill, a female, high in the tree when I remembered to check for it. Its pretty obvious that there is quite a difference between the appearance of the male and female. Below is a picture of a female I had taken a couple of years ago. 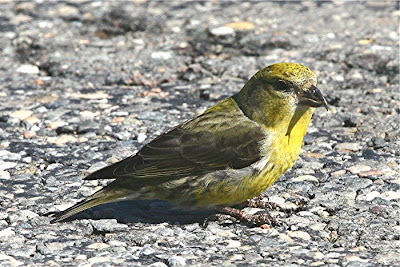 In the photo of the female above, as 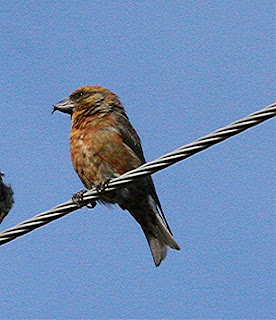 well as in the photo of the male Red Crossbill to the left, you can see the 'crossed bill' by which this species gets its name. For more detailed information about this species and the purpose of its crossed bills, an informative webpage can be found at Talk About Wildlife.

Next on my winter list, now that I have found Red Crossbills, I will be on the look out for White-winged Crossbills!

What a lovely color he is...way too red to be a purple finch. At least as ours are here on the west coast. Great RT post.

Love the red bird they are so unique for me ^_^! Thanks for sharing!

Great bird pictures (both this post and the female crossbill on your MOnday's post. We watch birds but I don't get many good pictures -- (too uncordinated to handle binoculars AND camera). So I really appreciate seeing great photos like yours. Tx for sharing.

I've never seen a crossbill of any kind. These are great! The red one is certainly eye catching. I always learn something new in your blog :-)

They are great birds and lucky you to see them close to your home.

we have a very special Scottish crossbill over here, I'd love to see one, they look pretty similar to your species here!