Its that time of year again and the search is on to find Snapping Turtles laying eggs.  I had searched yesterday morning, looking for turtles but had , had no luck.  However today was my lucky day. I was almost ready to give up and go home when I saw a turtle walking toward my car along the roadside. 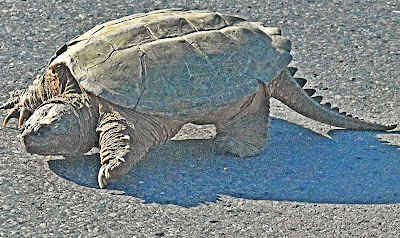 There was no action to see other than the turtle wandering around and a couple of times tried to cross the highway, however I directed traffic calling attention to the turtle on the road by gesturing toward it  and drivers caught on, saw the turtle and avoided hitting it.  I took a few pictures of the turtle nosing around on the edge of the roadside. 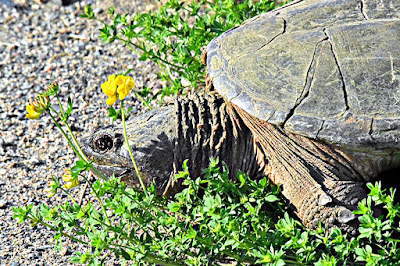 These huge reptiles are big, ancient  , pretty ugly looking things; but I still find it fascinating when their rhythms of nature can be tracked every year.  After my first turtle sighting I went home and downloaded my pictures and then went down to the river area again AND  this time I found a turtle laying its eggs in a hole dug in the sand alongside the roadside.  Wow!!! What a lucky day I was having!  The exciting thing about this second sighting was that I got a picture of a turtle egg being dropped into the hole it had dug.  As soon as the egg dropped the turtle immediately put its hind legs in motion to draw sand from the sides of the hole to cover the eggs it had laid. 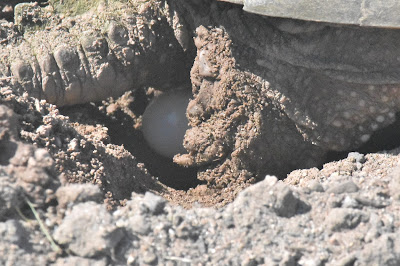 The turtle egg is the round, white ball in the center of the picture above.  Good job Mama Turtle!!!
I shall mark September 20th on my calendar as a reminder to check on the possible hatching of  this nest site.  The average incubation period for these newly laid eggs will be about 90 days! 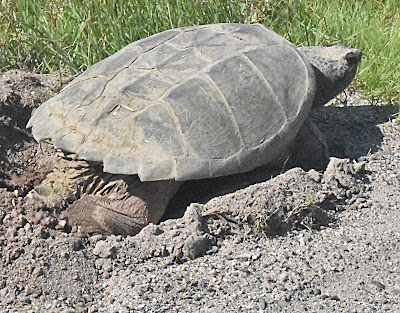 Above the turtle can be seen covering its eggs nest with a sweeping motion of its strong, powerful hind legs.