The colours of Bird Alley

Our most recent arrival at Bird Alley yesterday was a White-throated Sparrow!( seen in the included picture, see its white throat! and its yellow lores) actually there were two of them!
We had many feathered visirors yesterday and we were pleased to welcome back the Song Sparrow which had not appeared for the two previous days.
The very busy Blue Jays ( and there seemed to be several), added their beautiful blue to the outdoor scene, The yellow of the American Goldfinch was very low key as their appearance was very brief. We did not detect any grey as the little Juncos which had appeared to be quite plentiful on previous day did not make an appearance
The colourful red on the back of a Hairy Woodpecker's head was missing so we can conclude it was a female of the species that was feeding in the alley and to finish off the day's listing was the ever present, loyal, Black-capped Chickadee 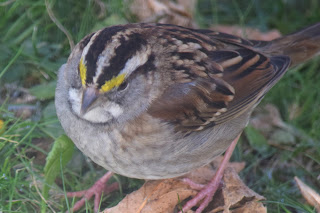 I love their sound, pretty sparrow. Enjoy your day, wishing you a happy new week!