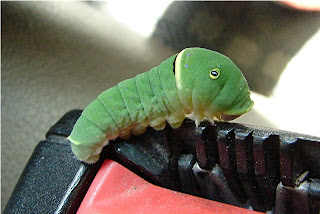 Although I have seen hundreds and hundreds of Tiger Swallowtail Butterflies, for they seem to be everywhere in the early summer, I had never seen an Eastern Tiger Swallowtail Caterpillar until this week. We had been walking along the edge of a river admiring the beautiful Water Lilies and the reflection of blue Pickerel Weed growing there. 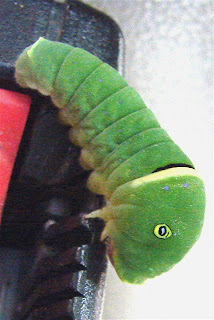 Upon returning to our car my sister-in-law remarked, "Oh, I see we have a visitor!" Perched upon the receiving end of my seat belt was a fascinating, intriguing looking, smooth, green caterpillar with black, blue and yellow eyespots and a black eyebrow! I don't know how it got there but I suspect it may have been caught upon my clothing or camera and I carried it back to the car with us . We considered ourselves very lucky to have seen it for from what I have read, they are often located nearer the tops of trees, rather than in lower locations. As we studied it we could see that it retracted its head within its body but when it walked its head would protrude out of a front opening. 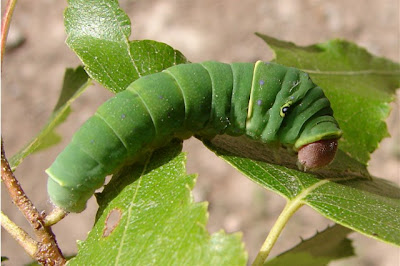 Before we left we carefully placed the caterpillar on the leaves of a nearby tree.

Cool head -- nice that it is a convertible for this time of year! Great pictures as always. National Geographic should look you up.

Thank you nbnature lover for your very astute observation!

Yes, it is definitly a very COOL CAT-erpillar! Glad that you enjoyed; your comments are always appreciated.