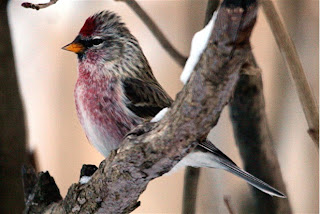 This handsome little finch, a male Common Redpoll, made its appearance at our feeders on Thursday of this week. Common Redpolls summer in the sub-Arctic regions of Canada 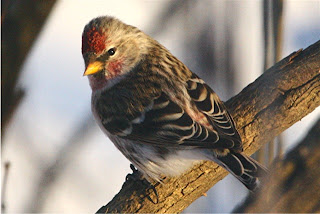 but winter further south; in our region and on down to the northern U.S. The male is easily indentified as it has a rosy pink colouring across its chest while the female has little, or no red, except on its crown. Some years Redpolls are plentiful, however we had no Redpoll sightings at our feeders last year, and this is only my second Repoll sighting of this season. Hopefully I will have many more opportunites to photograph Common Redpoll as the winter progresses.