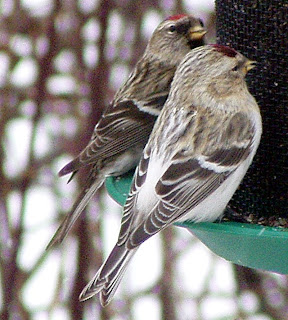 During January, 2004, I had a confirmed Hoary Redpoll sighting at our feeders. It visited our area for a few days and I was able to take photos of it perched on a feeder beside a Common Redpoll. Its white, unstreaked breast, smaller beak, white, unstreaked rump, and unstreaked under tail all said, "Hoary Redpoll"; as well as its overall lighter appearance compared to the other Redpolls there.

The first three pictures posted above are of a confirmed Hoary Redpoll sighting in 2004. 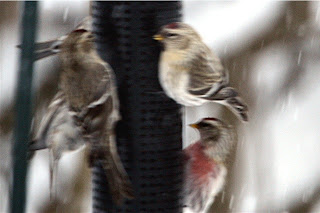 Since that sighting I sometimes will notice one particular Redpoll that stands out among all the others being much lighter in colour, and I start to wonder if it might be a Hoary Redpoll.
Such a sighting occurred on December 29th. On that particular snowy day I thought I saw an American Goldfinch at our nyger seed feeder. The bird appeared yellowish-white in colour and was much lighter compared to the other birds there. However, I knew it wasn't a Goldfinch when I saw the red patch on its crown. 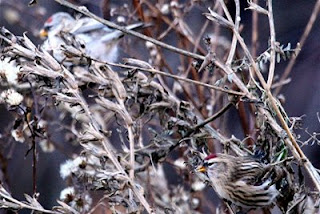 In November of this fall/winter season my first sighting of Redpolls included two; one very light in colour and one much darker. Look carefully in the photo above and you will find both Redpolls. Notice the distinct differences in their colouring.
We have a lot of Redpolls at our feeders these winter days and it is always interesting to watch and study the flock; and wonder if there might be a Hoary Redpoll among them.