I recall the first time I had seen a Northern Shovelor!  I was fascinated with its Shovel- like bill and the handsome colours of the male with the large russet coloured patch on his body and the blue shoulder patch and its green speculum and its orange legs and its dark green head. 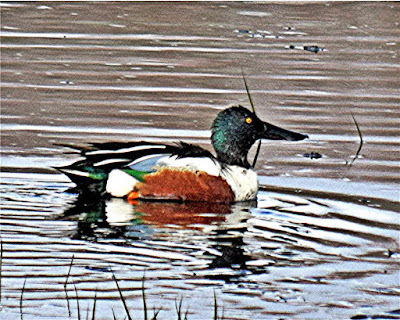 I found a pair of Shovelors fairly near by a few days ago and I have been checking each day to see if they are still  in the same location and they are!  The female's patterning follows very much the same routine of many female species.  Compared to the male of their species they take a back seat to beauty as can be seen in the photo below.  The female is not outstanding in the eye- catching department, however she also has the fascinating jumble  sized bill. 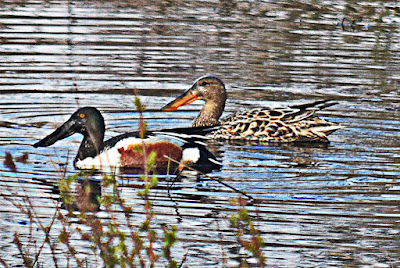 The Shovelor is a dabbling duck and it uses its oversize bill to filter vegetation and food substances through the comb like edges of its shovel bill.  When reading about Shovelors in Sibley's guide to Birds, he had written that "Shovelors do not dip for their food.
This information confused me somewhat as I had taken several pictures of these Shovelors dipping and I had thought that they were searching for food at the bottom of the water inlet that I had found them in! 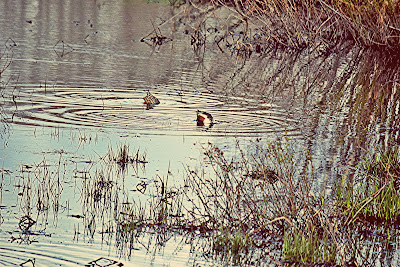 However with further research I found mention of Shovelor's dipping as a characteristic of their mating rituals!
Wouldn't it be wonderful if they nested at that location and I got to see Baby shovelors in the near future!  It is a treasure to know of these interesting locations and possibilities.  I shall keep tabs on thse two over the coming days!

Great post on the shovelers! It would be cool if they nest nearby. Great photos! Enjoy your day!