E is for egg for ABC Wednesday

One day in 2011 My husband and I visited a garden shop, The  garden shop worker told us that a Robin had built a nest and had laid one egg in it. I told her that I would love to see the nest?. She took me outside and moved some potted plants on the shelf that were placed there for keeping the nest hidden for the safety of the bird and the nest. 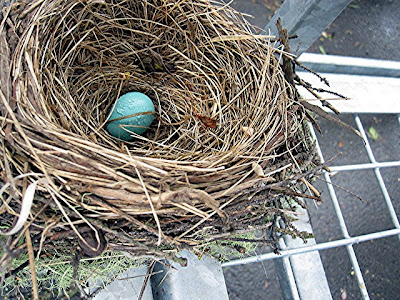 The beautiful blue egg looked cold  and I could see some water drops on the egg. Perhaps it was a young inexperienced Robin that had laid it. I wonder if it will be back to sit on the egg? I somehow think, not likely. Perhaps the fact that there was only one egg might be an indication that the bird had changed its mind about nesting at that location. It is wonderful how the staff of the garden center are looking after the nest location and protecting it and the egg. I shall have to return next weekend and ask about its development. Isn't the egg a most beautiful colour?!!" We  returned and had checked back later to learn that the Robin had never returned and that the egg had not developed and hatched.

Flash forward one year and we returned again to the same garden shop:

The next year  we returned to the garden center ( where we had seen a robin" egg the previous year)  to buy some pansies for our garden, and as soon as we arrived we saw this sign shown below! 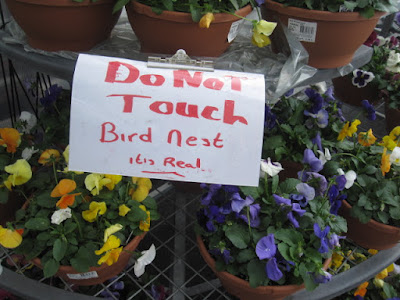 Ah ha.. a staff now experienced with finding  a Robin's nest with eggs laid in it! had made and posted a signto alert the public to the presence of the eggs.   Ah ha!  Its seems that last year's events have been repeated.  Last week, a Robin built a nest
there among the pots of flowers.  I have drawn a circle on the picture to show where the nest was. Look carefully and you can see the eggs in the nest, 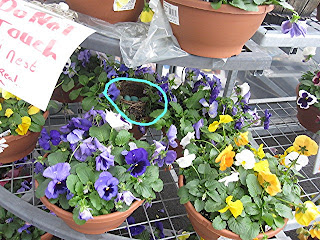 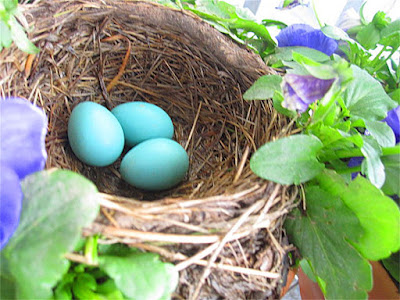 These three beautiful abandoned eggs shown above were never hatched. Their potential was never realized.  This was a very bad  location choice by an inexperienced Robin.

End of story as we  had returned to the same garden center the next year and asked if there had been  any nest building or egg laying the next year. Hopefully the egg laying Robin hah found an excellent location, having learned from her previous bad choices and has raised a successful brood of beautiful young birds.

Yes, I know, its a long story but I chose to relate it instead of just showing the egg pictures.
I am linking today to ABC Wednesday Round #21 hosted by Melody. Thank you Melody. The link can be found here:
https://abcwednesday.com/

Sad for the robin
A wonderful story though

What a suprise so see something like this in an unexpected place.

I guess she finally found a more secluded location for her nest.

Hello, the Robin's blue eggs are so pretty. Sad story they did not hatch. Happy Thursday, enjoy your day!