A second red fox sighting of the week

I was fortunate to have seen a red fox earlier this week[ please scroll down fot the posting of it] and didn't think that luck held another sighting for me again so soon:, but yesterday we had stopped by a flooded area along a roadside where we had seen two Wood Ducks swimming, so hoping for a picture of this most beautifulduck species we had stopped and were sitting in our parked vehicle when my husband looked up and saw a fox running along the side of the road towards us. When we started our vehicle it [the fox]suddenly turned and ran up the roadside that it had been running on. The pictures are not too close but this is the best I could get. We followed it up the road
. 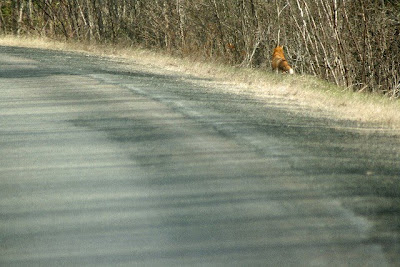 Dashing for safety and maybe to cache its food., to save it for another day,
It's best to run away. 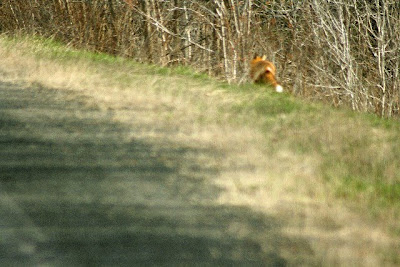 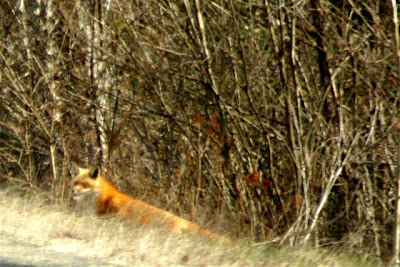 My husband had seen that it had something large size, duck- size? in its mouth In the above photo you can see that the fox has something in its mouth but it is not too distinct; it might look more like a shadow to you. 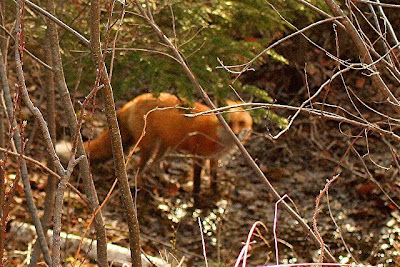 Shortly the fox left the roadside and disappeared over the edge, As we pulled alongside the location where it had disappeared it was just standing there looking at us. It no longer had anything in its mouth. We figured it probably had hidden it somewhere. This wasn't much of an adventure, but we found it rather exciting.

What a great week having had two red fox sightings!

Cool sighting of the fox! They are pretty critters.

Wow! That is so great to see.Good adventure!

Any time you see a Fox it's exciting I think. You got great pictures Ann.
B.