A visit from a Baltimore Oriole

What a lovely surprise yesterday afternoon to come home to see a handsome male Baltimore Oriole feeding at our oriel feeder.   I only had a back view initially but then put out orange slices for it to feed on 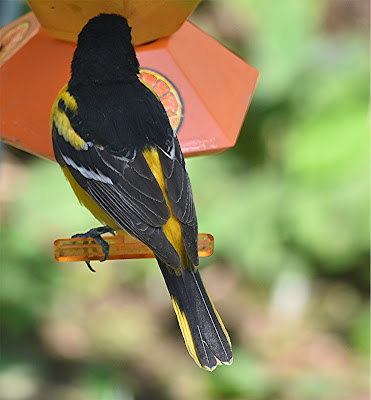 Then I put out some orange pieces and in only a moment the Oriole had returned! 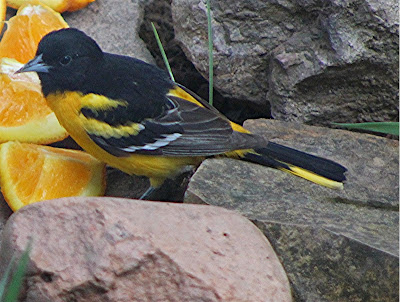 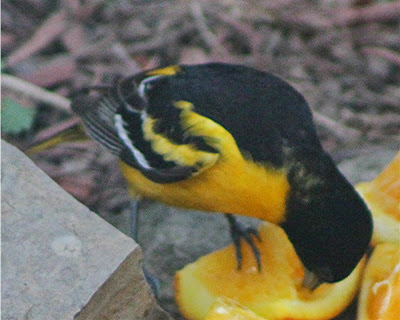 On Friday morning I was following warbler sounds from tree to tree. I kept hearing warbler songs but I didn't see any warblers.  Then I turned suddenly to my right and I saw the movement of an animal diving into the ground.  My first thought was" groundhog" as I had often seen groundhogs in the area where I was standing.  but, no, that didn't seem right as the body of the creature did not appear to be as solid and hairy as a groundhog would be.  What I saw was softer looking and supple looking. So I trained my camera on the hole where the unknown creature had disappeared into.  I could detect slight movement and I  then realized that something was looking at me.  It was as curious as I was. If you look carefully around the center of  the picture below you might be able to see two little ears on a rounded head as I did, and I then concluded, a baby fox!.  There had been a den in this area before.  And the ears triggered a flashback of something furry diving into the hole  just a few moments ago,there in the ground before me! 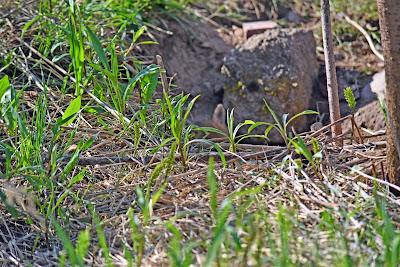 So I felt determination set in and I just had to see a fox or foxes, and so yesterday as my husband and I set out for a walk through a  nearby wooded trail looking for warblers, I suggested to my husband that we walk by the hole ( den) in the ground.  Our timing was perfect as we saw an adult fox ( presumably Mama Fox) leaving the den area. We were all very curious   and very quietly watched each other.  Mama soon left after checking us 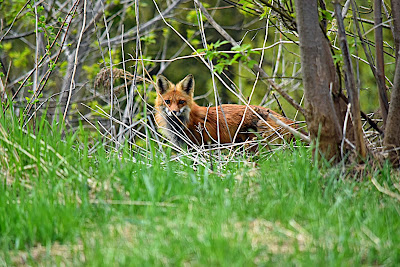 out.  I was surprised she left as perhaps her babies could possibly be in danger from us. 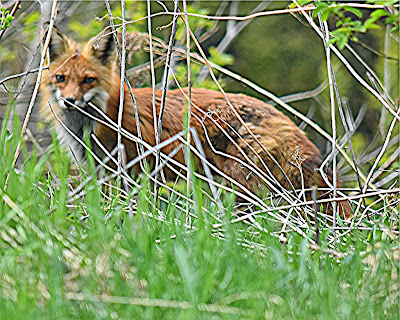 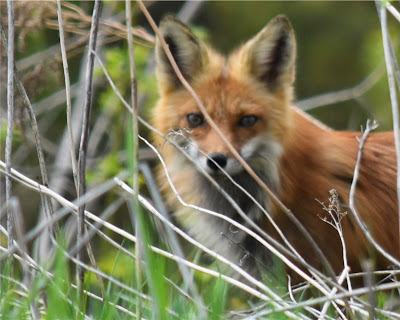 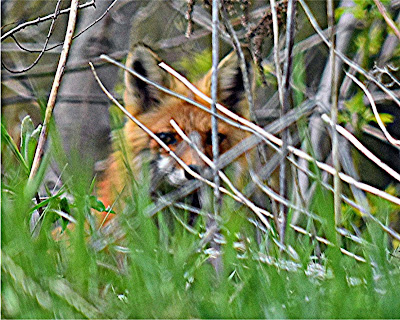 But don't worry Mama Fox, you haven't seen the last of me.  I just have to see your babies and you are in a location that I walk by daily, so I will be hopefully checking out you and your babies again!
I will only be carrying my camera and my  walking cane as I stroll by your home, for after all you are located very close to my home, only less than a distance of a half of a city block away.,  May you and your family fare well over the next few weeks.  And Mama, please do not decide to visit us or our cat that loves to roam around outdoors.  Shakey, our cat will not be allowed to stay outdoors overnight  during the next while because you are probably a very good hunter and you and your kin have a reputation of being foxy, sly and dangerous!  I enjoyed taking pictures of you Mama. Take care and tend your babies well.  I do not pose a threat to you and your family! 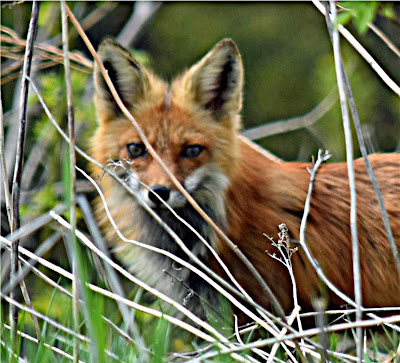 I was starting to despair of not seeing any warblers since we had heard news of various sightings elsewhere in the province until Thursday morning that is. I was standing at our dining room table when suddenly 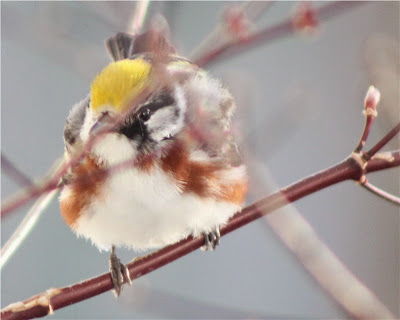 I saw  a Chestnut-sided warbler looking in the window at me!  What a sweet moment and what a sweet bird. My husband came into the room and I said "Look our first warbler and he immediately identified it! This little bird stayed for quite a while! 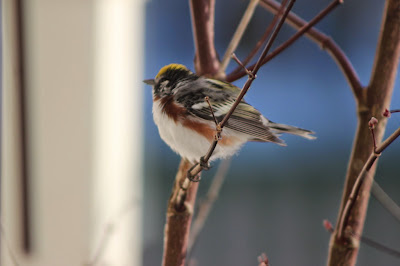 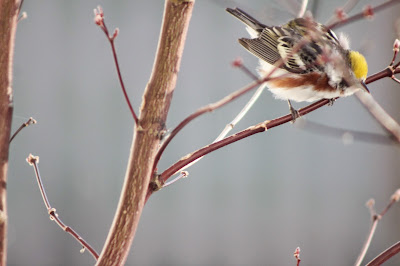 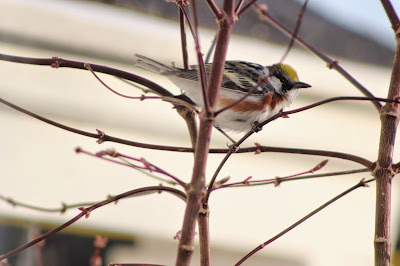 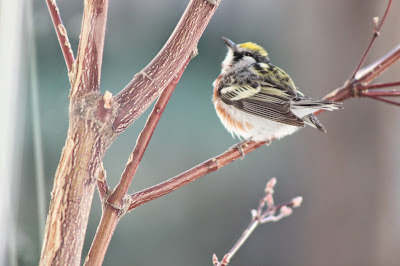 From several of the pictures you can see where it gets its name Chestnut sided warbler. Its quite a distinctive looking bird and I love its yellow head!
Yesterday morning I decided to go to the edge of a close-by old stand of Pines looking for a warbler.  I immediately saw movement high up in a tree and so I directed my camera in that area.  I was pleased with my photos when downloading them when I was back home.  I hads found a Black and White warbler which was quite easy to identify.  Its markings were quite  stand out distinctive and I loved its white eye ring!  Warblers have such delightful colours and patterning.  I am anxious to find more warblers over the weekend! 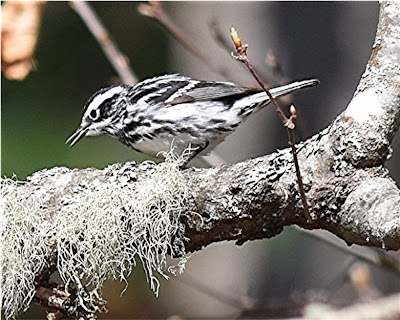 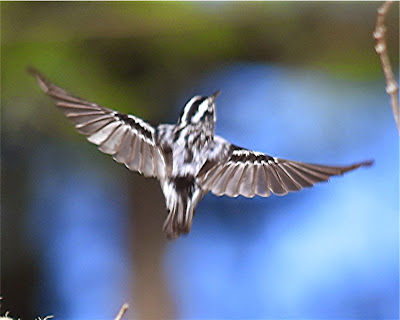 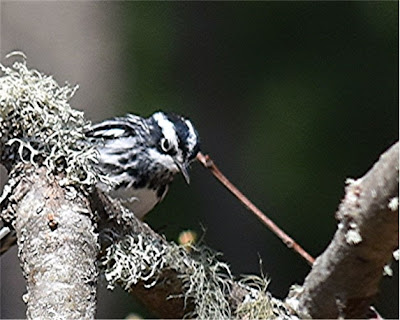 This photo shoot opportunity  offered many different poses!
I am linking this morning to Eileen's Saturday Critters which can bew found at:http://viewingnaturewitheileen.blogspot.ca/

Eagles seen along the Oromocto River. 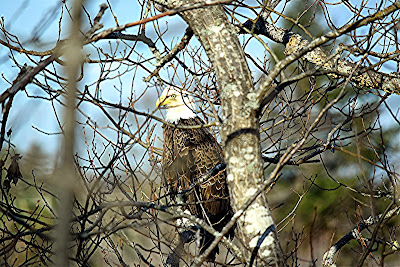 location.  Almost every day I can find an Eagle perched in the trees along the river. 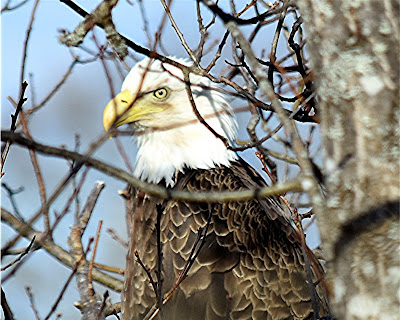 Today when I went to the river early in the morning I found an eagle perched in a tree as I was expecting.  However the eagle did not stay there long as a Crow soon came along and started chasing the eagle.  Midway during the chase the Eagle did a slight turnabout in mid air and it looked like he was yelling at the crow.  we can imagine what the Eagle might be saying.. Like  " Get the H... out of here and LEAVE me alone!"  However the chase continued until the eagle found another safe haven in the branches of another tree.

More adventures along the river will continue tomorrow!

I haven't seen a savannah Sparrow for a few years until yesterday!  What a welcome sighting this was!! 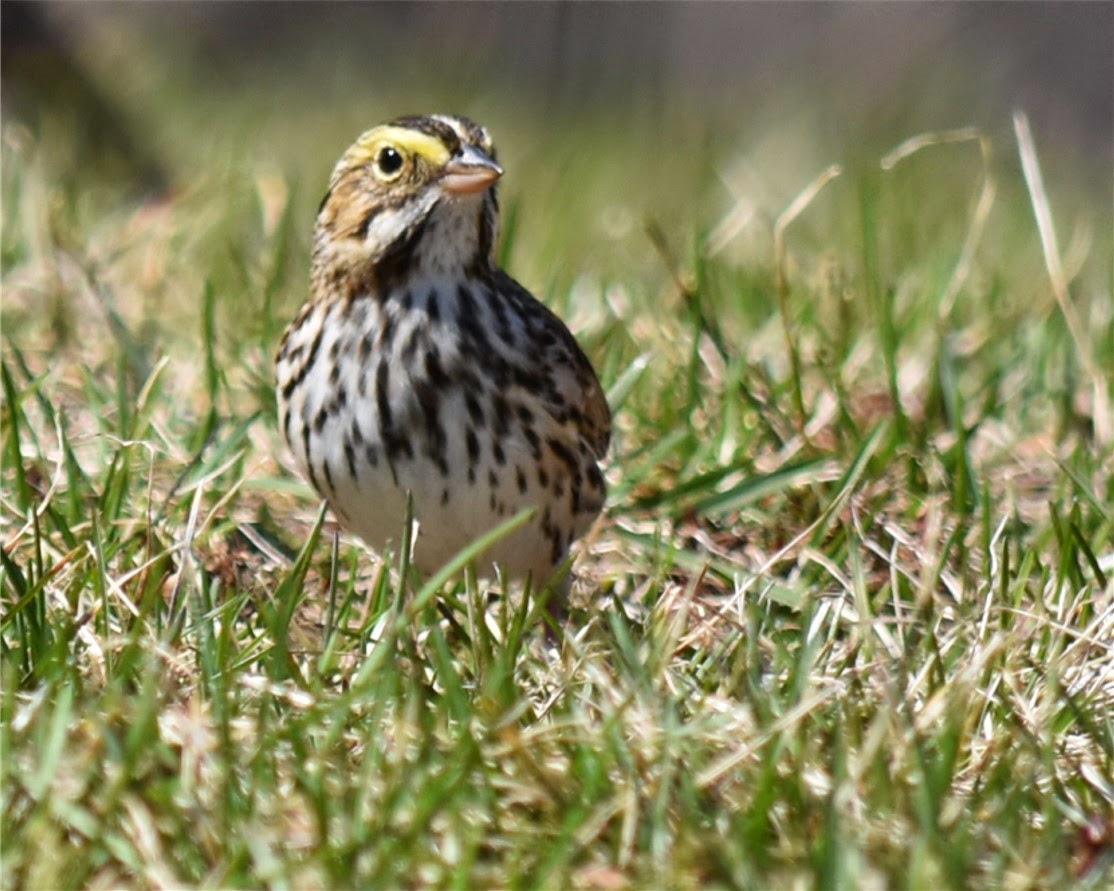 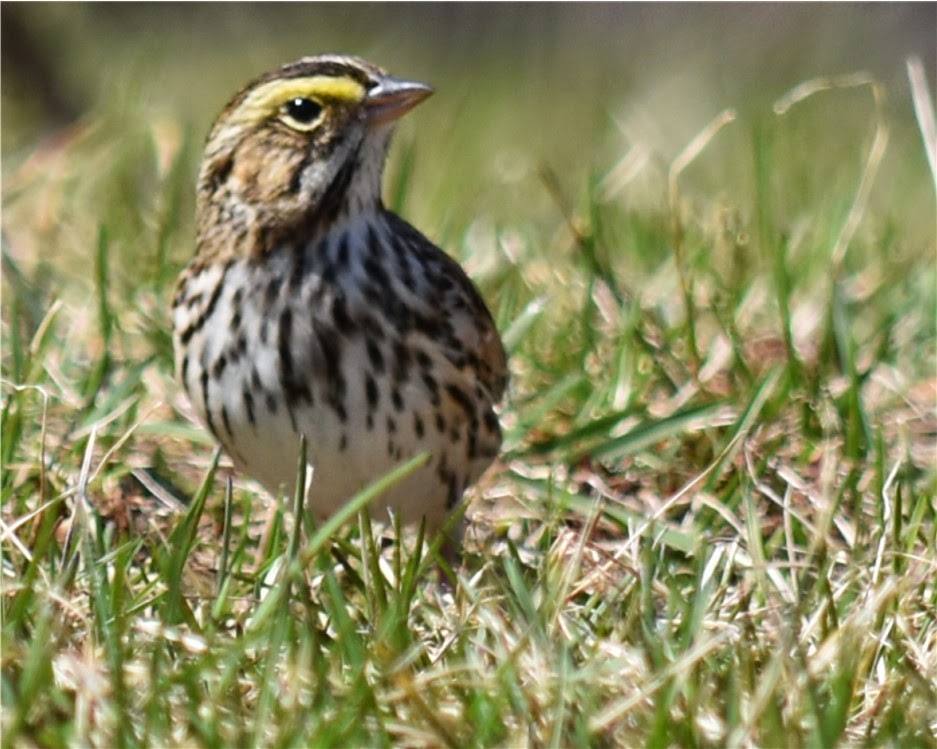 I have watched for those beautiful yellow lores every spring!  and yesterday was reward day.

I am still fortunate in seeing ducks almost every day!  Earlier this week I found a small group of ring- Necked ducks in a small roadside pond. They took off almost immediately and I was lucky enough to capture their pictures as they rose upward in flight. 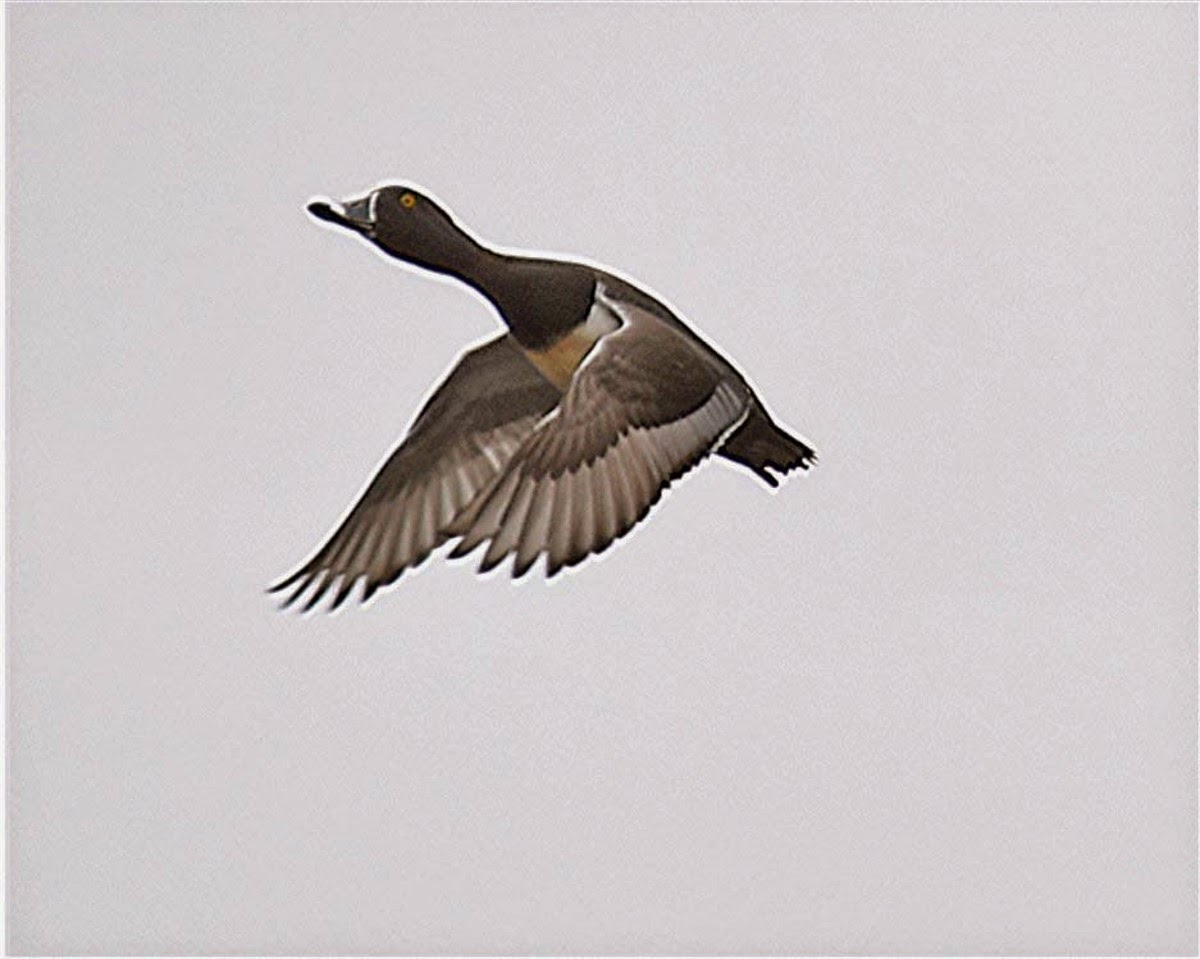 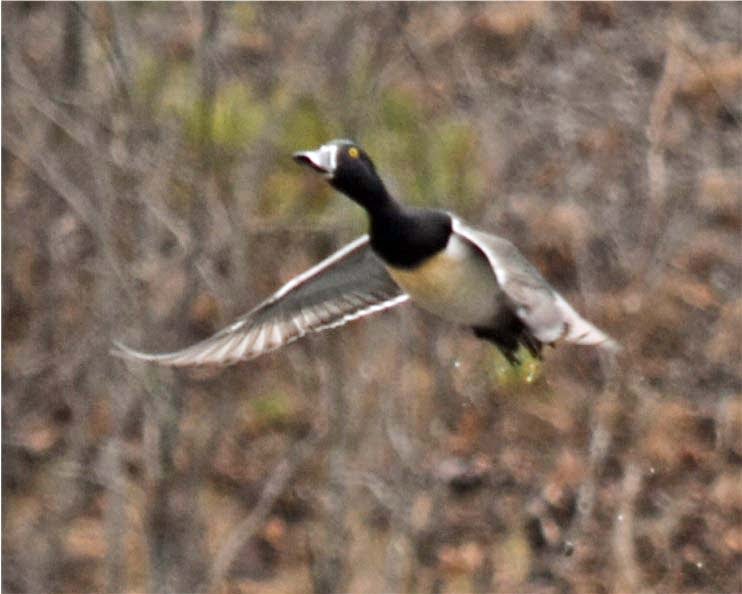 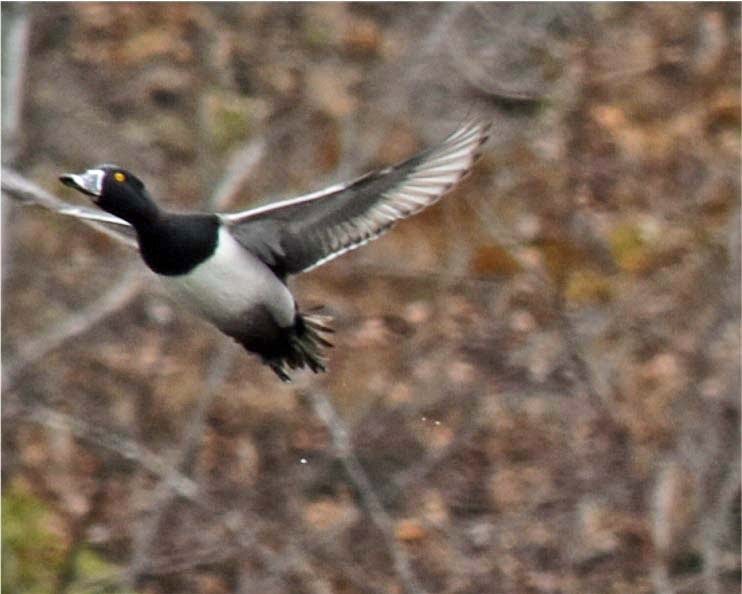 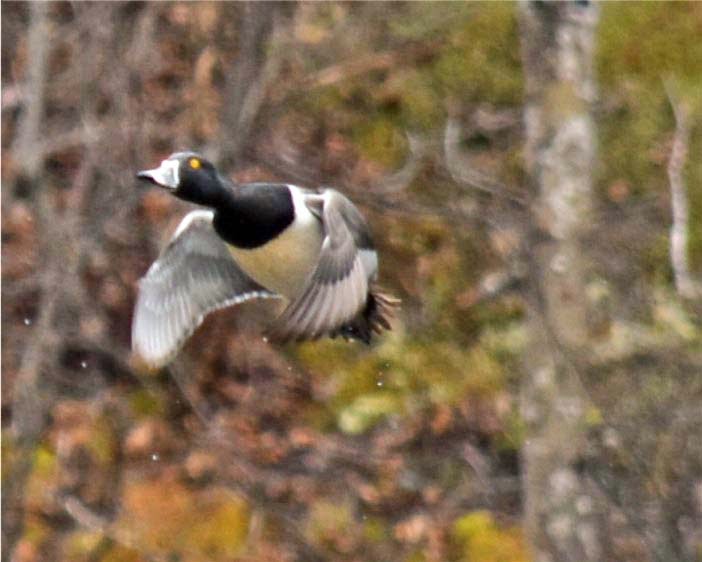 I am linking this morning to Eileen's Saturday's Critters at:
http://viewingnaturewitheileen.blogspot.ca/
Have a wonderful weekend everyone!