We have a tall Chokecherry tree which attracts many feeding birds. Recently , American Robins have been breakfasting on the berries there. 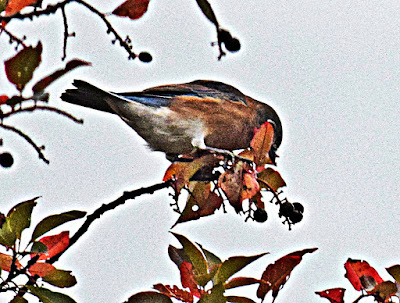 The delight the Robins are finding in  the berries is another reminder to me that I did not get around to making Chokecherry jelly again this year.   Hmmmm... Maybe next year?! 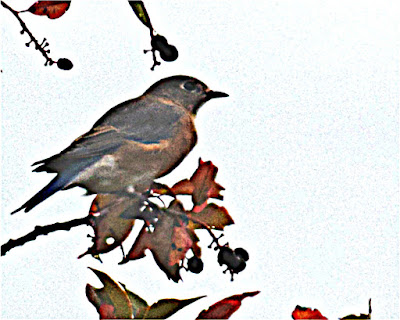 I do hope the Robins return to this tree another day as I love photographing them in this tree.  During October I will have many more occasions to take pictures of Robins feeding  in our yard as they will return to feed on the many rose hips on our bower and the beautiful, red, luscious Mountain Ash berries on our Rowan tree. We also have three ornamental crab-apple trees  which are  now covered with little red crabapples.  Harvest time is a wonderful time in our outdoors around here.
I am linking today to Eileen's Saturday Critters.  It can be found at
viewingnaturewitheileen.blogspot.ca
Have a wonderful last day of September today folks.  May it be a favourable day of viewing nature for you. And  a mighty welcome to October tomorrow when my grandson D. Harvest celebrates his 13th birthday.

I am always hoping at this time of year that I see a Ruffed Grouse or Birch Partridge while driving along an old country dirt road and that is the sort of circumstance I was in when I spied this Ruffed Grouse crossing a dirt road in front of my car one day last week. Usually to my dismay as soon as the grouse is alerted to my car's presence it takes off, but not so on this occasion. this grouse just continued its walk to the roadside, then ambled off into the roadside vegetation as I got a couple of photos of this lovely bird. 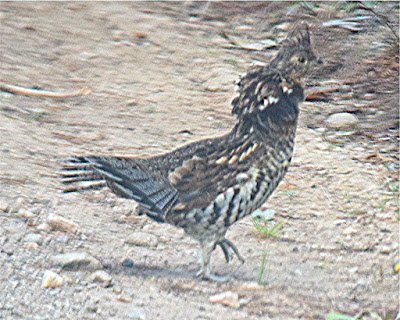 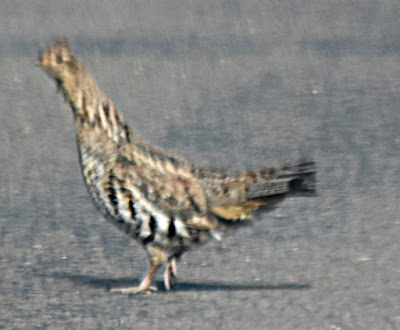 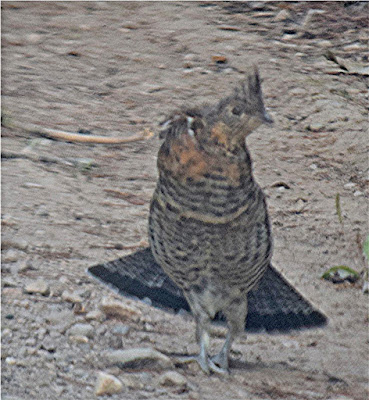 Have a lovely day everyone!  Keep cool!

The flash of yellow on the rump of the small bird excited me.  I have been watching for this little warbler all summer but had not seen one until this September morning.  We have lots if little birds fliting around this morning but they are so small and fast that I have to take a picture and then study the foliage in the photo to try to find the bird.  In this case I studied the picture looking to find a dash of yellow and I found it twice in my pictures! 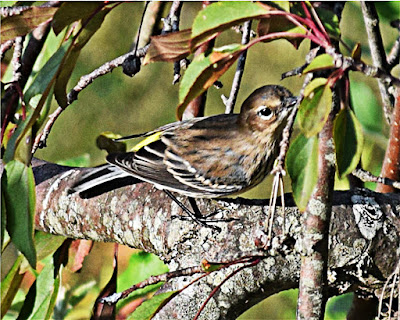 The yellow rump on the warbler above and below  is easily detected. 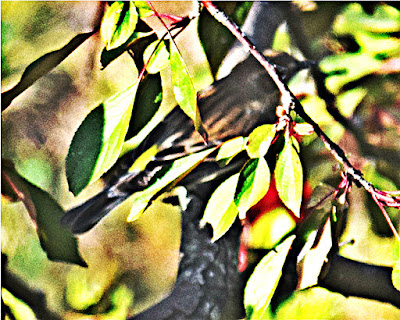 Thats all for today folks 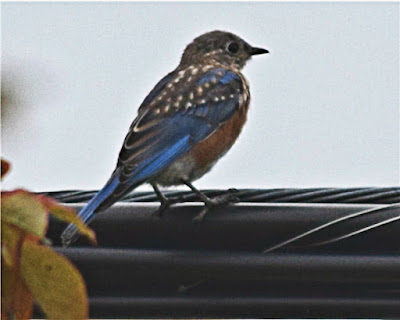 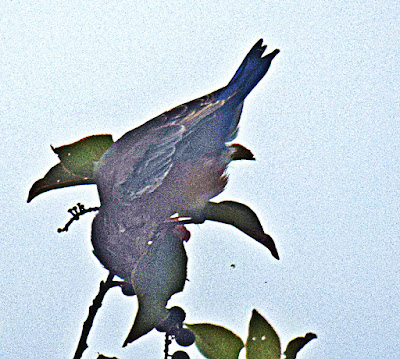 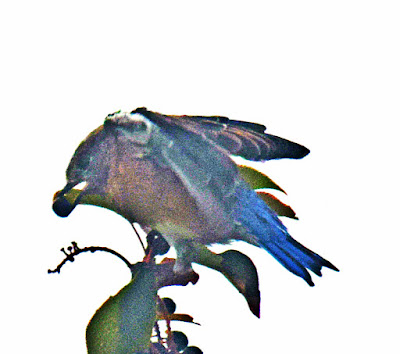 Ducks are becoming more difficult to find these days but there is one small pond where I can often catch a glimpse of a duck for as soon as my car approaches they scatter.  However one day this week I was able to capture a photo of one in flight as it was fleeing away and from the picture below I was able to id the duck as a Black Duck.  Its beautiful 'blue patch' was very recognizable! 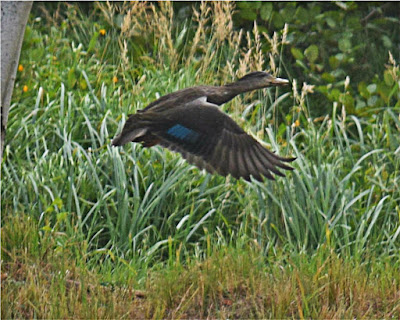 I am linking today to Eileen's Saturday Critters which can be found at:
viewingnaturewitheileen.blogspot.ca

Since I had last posted hummingbird photos we have seen many at our feeders daily, and they are delightful to get photos of. Here are a few of my most recent ones: 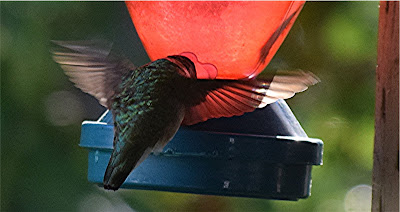 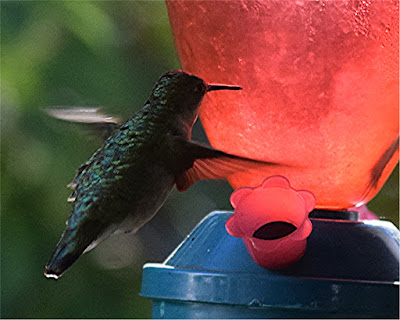 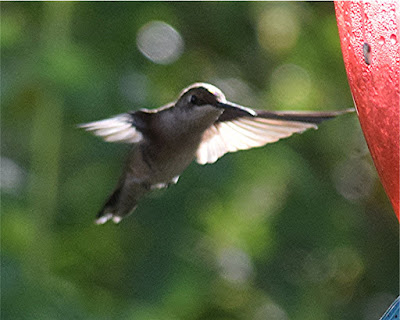 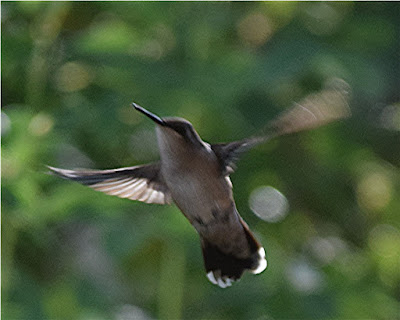 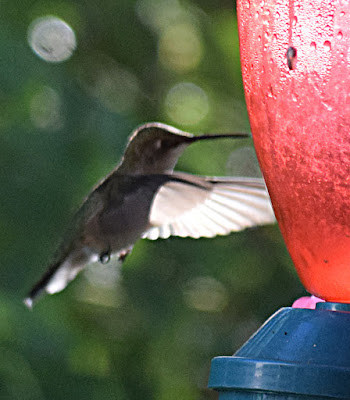 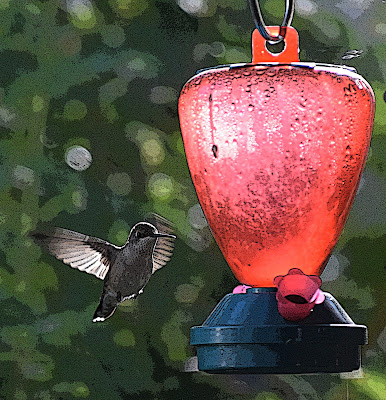 I am linking this morning to Eileen's Saturday Critters which can be found at: http:viewingnaturewitheileen.blogspot.ca
A wonderful day is wished to all on this cool second day of September.  School is just around the corner and as a retired teacher I shall wave to all of those yellow buses rolling down the highway on Tuesday morning.