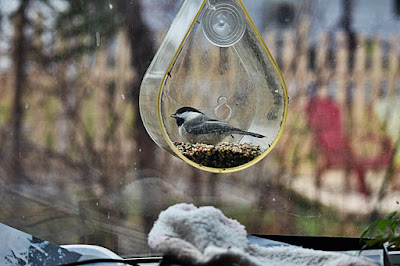 A delightful way to view birds from my comfy chair inside my house is by using a transparent window feeder.  Th feeder attaches to the outside of the window by a large suction cup.  Only Chickadees have fed there so far this spring but it is an exciting moment when I hear one enter the feeder.  If I do not frighten it away by my movements of taking pictures it will stay there and feed a bit! 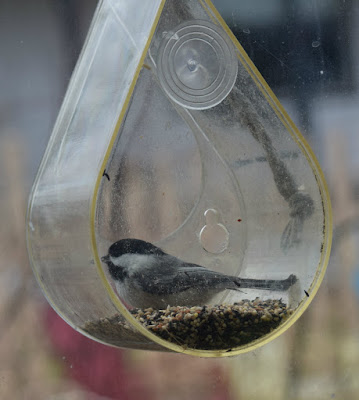 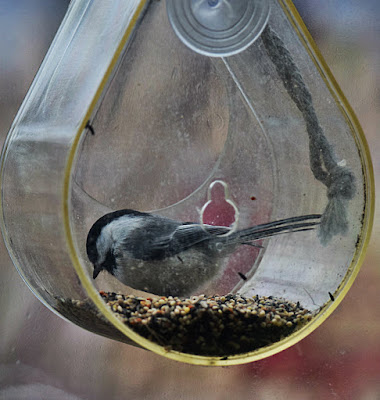 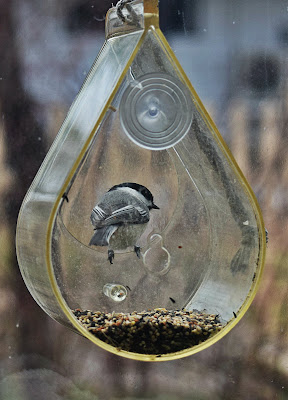 I am linking today to Eileen's Saturday Critters blog which can be found at viewingnaturewith Eileen.blogspot.ca
Have a wonderful weekend everyone
I shall be inside today on this rainy Saturday watching my window feeder.  Who knows who or what might show up!?

I don't know if my words can totally convey the wonderful nature experience that I had this afternoon with a Mourning Cloak butterfly. 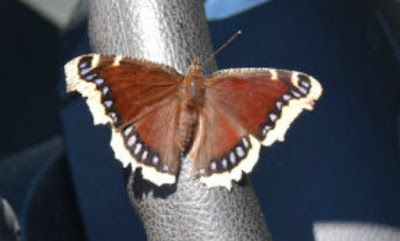 After having seen Mourning Cloak butterflies early a few years ago, we learned that this species will fold itself within the bark of some trees and over winter there and emerge when the warmth of the spring season develops. We caught on quickly and noted the locations where we most often saw these butterflies during the early spring months. My favourite location to find them is at the  Homestead Corner at Three Tree Creek. I like to think that perhaps my great great grandparents,  who homesteaded a farm nearby there also experienced the same awe of seeing these beautiful early spring creatures. I saw a butterfly today along the road into their old wood lot. I drove into the road until I saw what I had been looking for:, a Mourning Cloak butterfly! I then backed up my car while maintaining sight of the butterfly. As I could not get a good picture of it taken from my car. I rolled down my car window while maintaining sight of the ever moving butterfly. and then I stopped my car and got out. I momentarily lost sight of the butterfly, but looking down I saw it swirling around my feet and legs. Then suddenly it flew into my car as the car door and window were open. Wow, what a golden photo opportunity! The butterfly stayed on the steering wheel 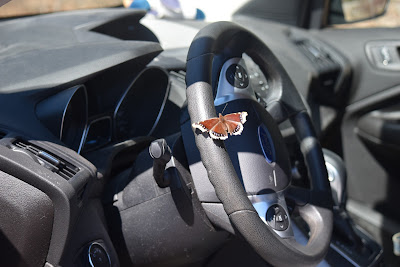 and I proceeded to take pictures, about 200 or so. The excitement of the opportunity gradually wore off a bit and so I decided to join the butterfly and sit in my car also. My presence behind the steering wheel did not appear to disturb the butterfly at all. We both sat there quietly for ten minutes or so 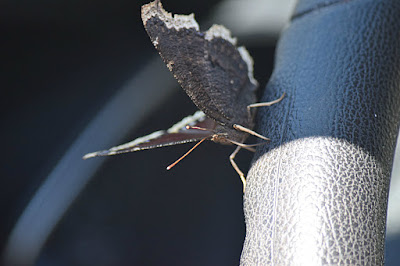 .After a bit, I decided I should perhaps return home and so I closed the car door. The butterfly noting the change happening flew out the car window. Bye, bye butterfly buddy. It was a great experience. 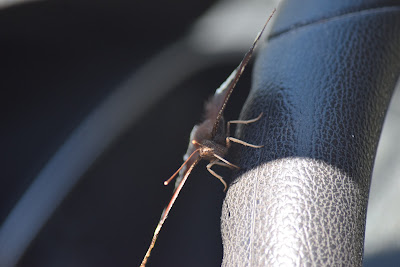 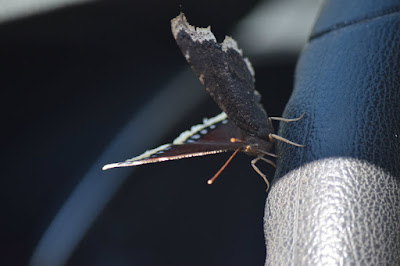 I am linking today with Eileen's viewingnaturewitheileen.blogspot.ca


Have a lovely rainy weekend folks.

I have always enjoyed collective nouns as their group names are sometimes very descriptive.  For example, when we first moved to our present home we used to have large groups of noisy Grackles arrive at our home's location  in the spring and perch in out two old Maples trees.  If you're familiar with a Grackle's sound, ? we always described it as a noisy squeaky, rusty gate.  I was slightly embarrassed of the noise and as we fed birds, I was a bit worried that the neighbours would be a bit annoyed at us, for perhaps enticing such a loud , noisy group to our neighbourhood.  Thus, I laughed today when I looked up the collective noun for a group of Grackles and discovered that Yes!   a group of Grackles are described as an annoyance or a plague of Grackles! 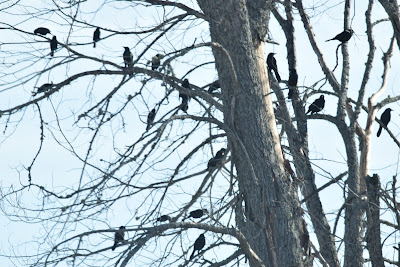 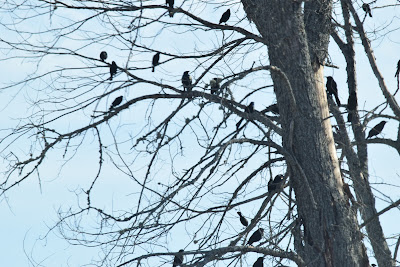 The next large group of birds I had found recently were Waxwings. There are two choices for their collective naming.  The first mentioned was an Ear-full of Waxwings. Yes that fits as I remember their sound being that of singing wires  with a slightly high pitch, so that kind of fits for me., The second choice which I have chosen to use here is a Museum of Waxwings.. I can't come up with a reason for this naming but I think it is rather interesting and unique. 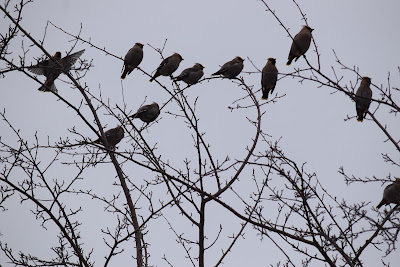 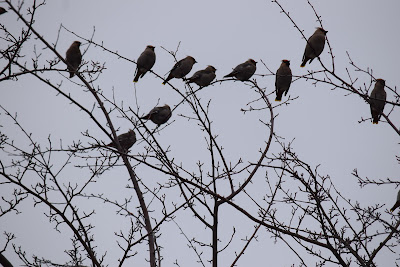 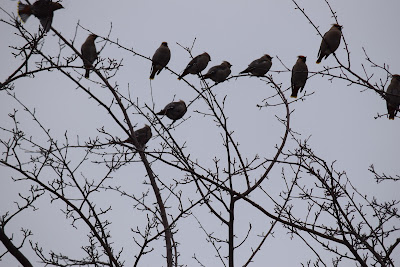 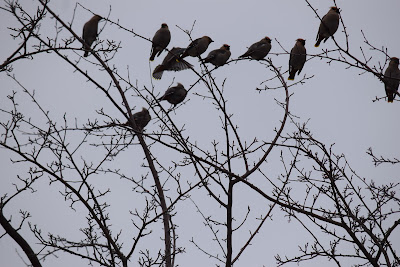 My next collective noun applies to a small group of ducks of perhaps only two or three pair.  In this picture of a brace of ducks there was one pair of Mallards that I could see and perhaps a couple of pairs of Black ducks. So the pictures below include a brace of ducks. 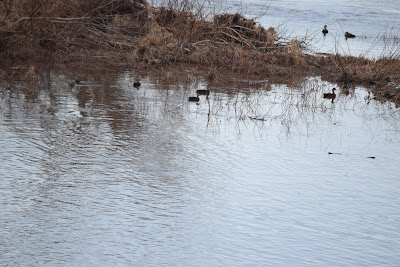 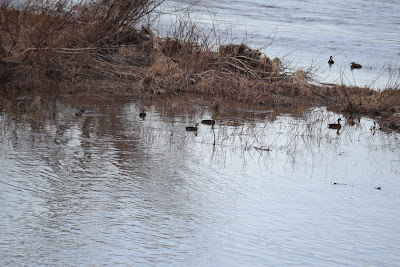 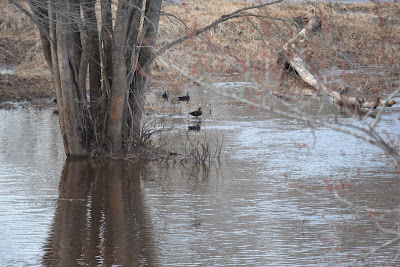 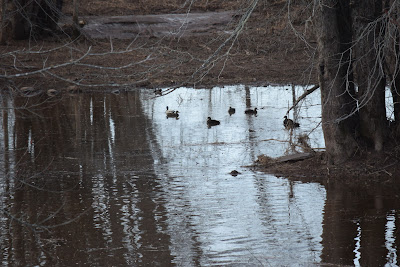 My last example today of a collective noun for a group of birds are Red-winged Blaclbirds.  This species of birds have been a bit elusive for me to find this spring , so this morning when I glimpsed a bit of yellow and red on one of the blackbirds wing. I was very happy about my find.  Collectively this group can be called a Cluster or a Cloud of Red-winged Blackbirds. 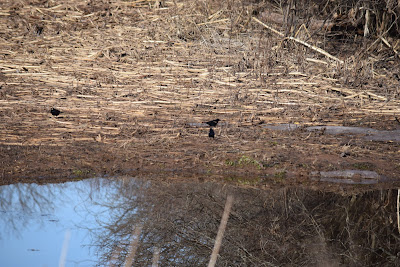 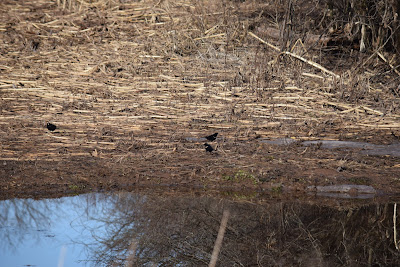 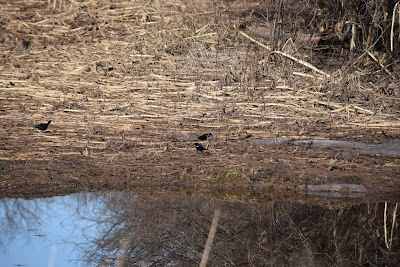 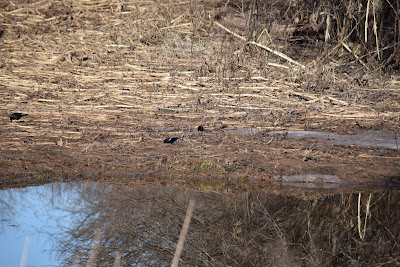 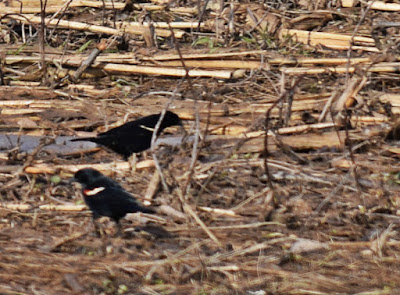 Thus, the lesson is Ended!

A Crocus,, our first spring blossom! 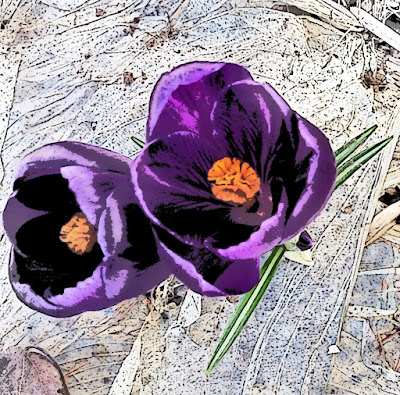 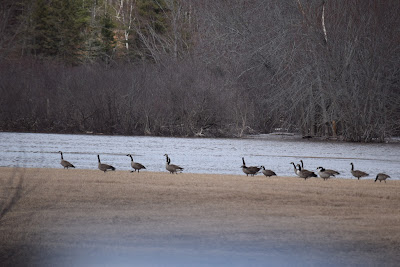 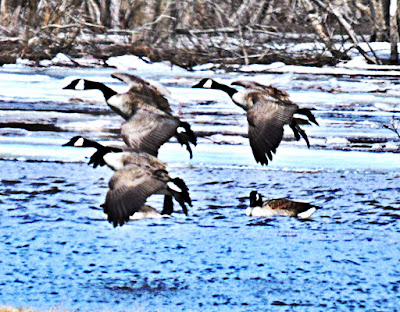 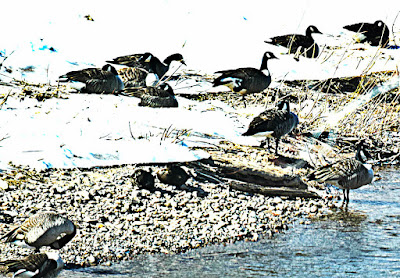 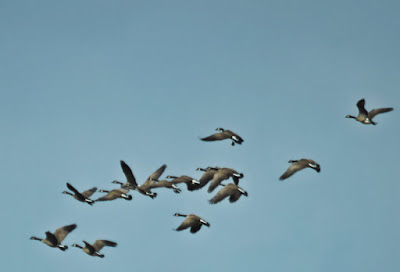 I am linking today to viewingnaturewitheileen.blogspot.ca