Today I have a new goal in mind.  I am hoping to find a bale of turtles! Yes, I used the collective noun for turtles, a whole bunch of them, a bale!
Earlier this week I took a picture of a Painted Turtle resting on a partially submerged log, just the one turtle with its reflection in the water below it! 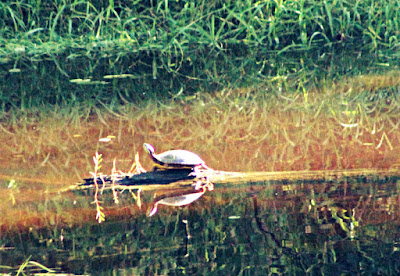 After having taken the picture shown above I drove on up the highway but before I returned home I passed by this location again and snapped another picture! Imagine my surprise when downloading my second picture at home to see not one , but three painted turtles there! 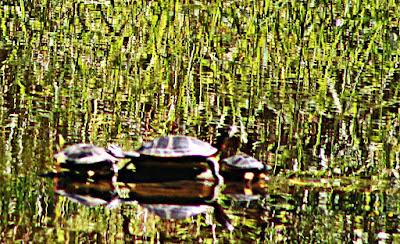 As I enjoy seeing turtles, yesterday I decided to go and see if I could see the same turtle at the same location.  I looked and yes, there was one there!  I took its picture and a surprise again upon downloading. Not one but two turtles.  see the smaller one on the log to the right! 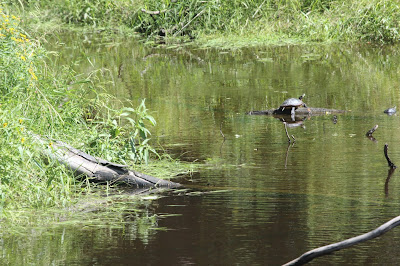 Now my question. I wonder what are my chances of finding many, a bale of turtles on the log there in the pond?  I shall follow up the possibilities during the next few days.  "Hello Pond, I'll be there shortly this morning."  Oh Happy Days of discoveries.  How wonderful nature is!!

Almost every morning I can  usually find female wood ducks in my favourite pond.  Today I think I will take my 400 mm lens with me when I go there to have a look for them again.  I think these ducks are the young of this year's hatchlings.  the fuzzy looking head of the female reminds me of a baby creature .  I love the outstanding white patterning surrounding the female's eye.  There is no mistaking her identity. 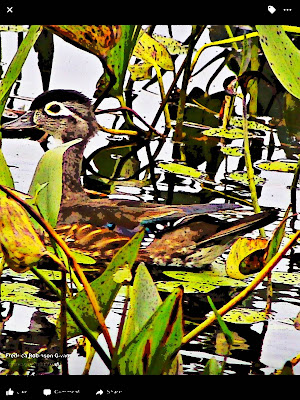 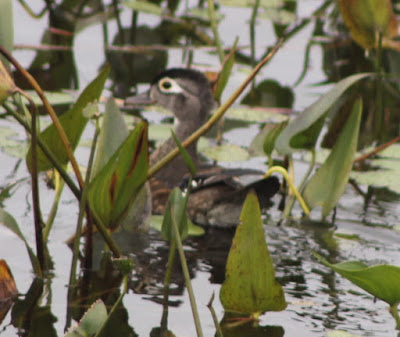 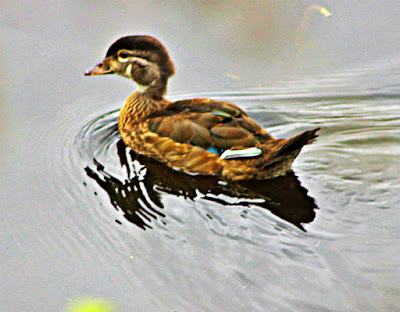 I think this one above is probably a young male 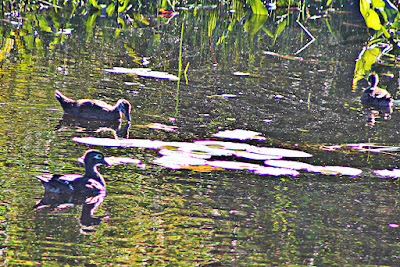 Regent Street in our city has been a source of frustrations this summer  as traffic has been rerouted in that area since early June due to an extension construction project..  On Thursday, while driving on Regent Street, all traffic ahead of us came to a halt. 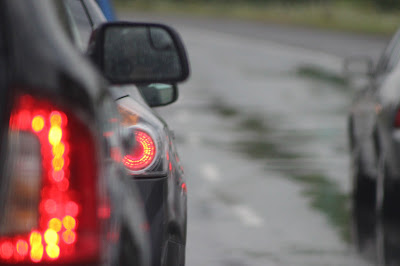 Attempting to see the 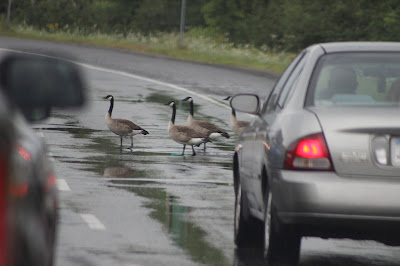 cause of the stopped traffic I scanned ahead between the stopped line of traffic and spied the source of the stoppage ahead walking slowly and calmly across the street in front of the stopped traffic.
My husband, David alerted me to a small group of geese to his left.  Aha!  This was obviously the geese's destination.  A patch of green grass adjacent to the street on the other side.  Methinks that  this venture probably was influenced the  whim that " the grass looks much greener
on the other side"!
As we patiently waited we saw the progress the crossing geese had made when we saw them appear at the front of the traffic line to our left. 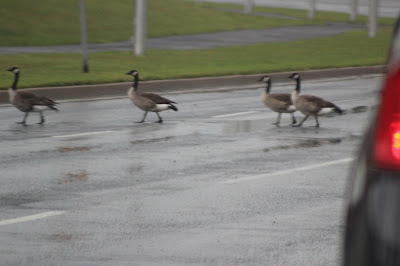 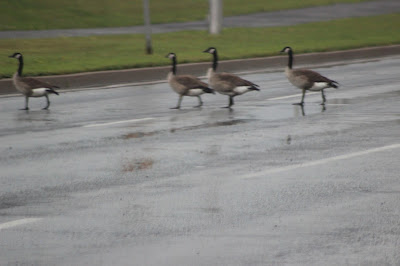 Just step up to the curb Goose Buddy and you have reached your destination! 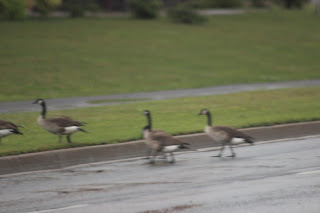 Yes, They have reached their destination! 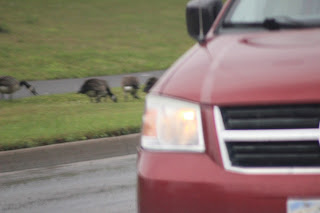 And then traffic was moving once again.
When we were leaving the area, we saw a large flock of geese to our right.  This was obviously the source of the crossing geese, where they had come from.  Hopefully they did not all want to cross the street, or maybe those that had crossed earlier may want to return to their original destination. 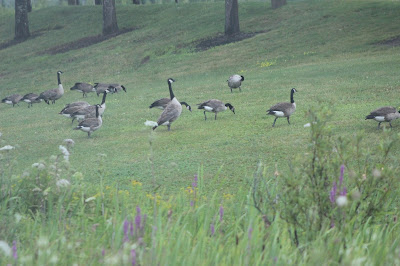 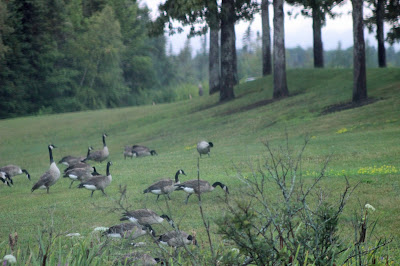 Drive safely everyone and keep your eyes on the road watching for walking geese!

It sure was my lucky morning on Monday of this week when I chanced upon this beautiful White-tailed Deer family consisting of: the adult doe and twin fawns.  The fawn were sticking closely to Mama as they fed and wandered 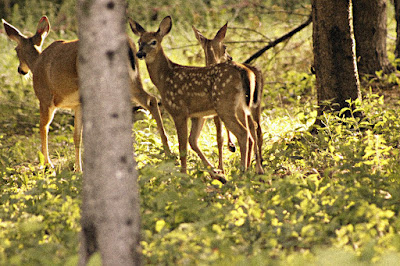 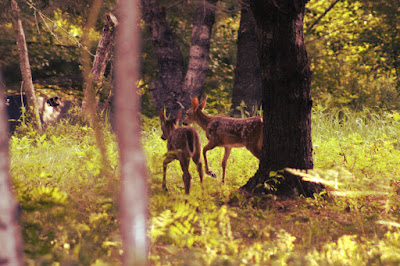 about in a small grove alongside the highway.  Traffic was wending its way around me as I had stopped my car carelessly in almost the middle of the road when I had sighted them! 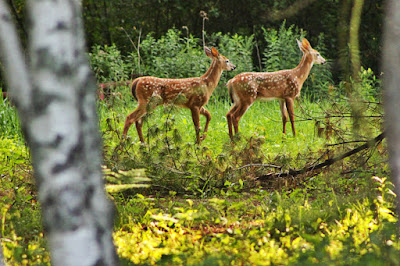 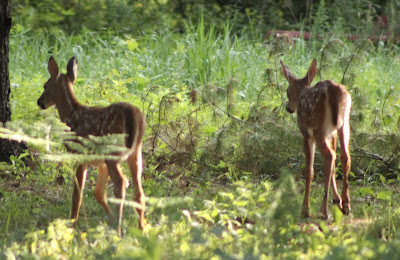 I am linking this morning to Eileen's Saturday's Critters at viewingnaturewitheileen.blogspot.ca

I have looked for this deer family several mornings since but I have not seen them again, however an esarly morning drive with my camera is never a regret and I often chance upon something interesting.  Wishing everyone a lovely summer's day.

Whenever I notice Common Primrose in bloom along the roadsides I start looking for the beautiful little night moth that feeds on it. The first time I saw a pink Primrose moth nestled within a closed withered blossom, I had thought I was looking at a new wildflower that I had found.  Not so, for as I got closer I discovered it was a tiny, pink moth within the bloom.  These little moths only inhabit the Primrose blossom at night and as night comes to an end the Primrose will close its blossoms and the moth becomes stuck within the blossom as can be seen within the yellow Primrose blossom below. 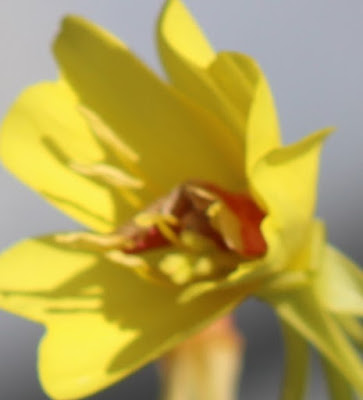 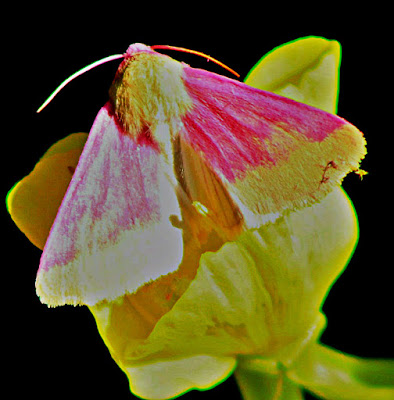 shown above is a moth on the blossom , not within it.
It is great fun examining Primrose blossoms and finding a treasure within.  The link included here will give you lots of fascinating information about these beautiful little pink moths.http://northernwoodlands.org/outside_story/article/primrose_moth_and_its_lovely_hangout