Note: This item is from the archives. It was first posted in February, 2007. 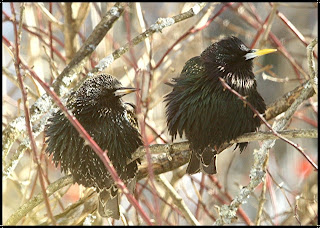 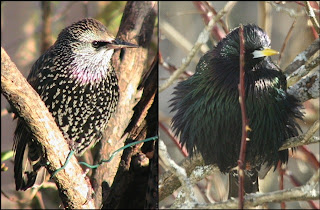 The composite photo to the right shows two Starlings taken at different times of the year; the photo of the Starling on the left was taken on Nov. 5, 2004, and the one on the right was taken February 13th, 2007. On p. 416, of his book, The Sibley Guide to Birds , David Sibley gives the adult nonbreeding period as lasting from Sept - Feb.

All Deer, All the Time: Take 2

I wasn't kidding ...
Another deer photo to add to the collection. When I saw this one the other day, it was standing in perfect profile for me. 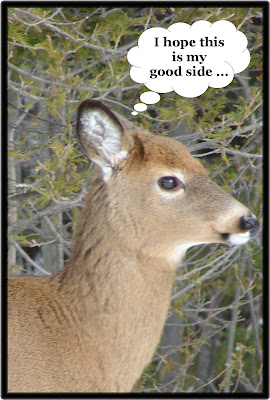 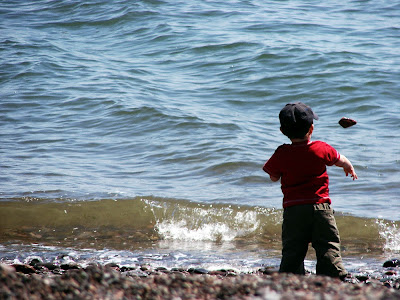 There may be snow all around, but I am remembering warmer weather fun. I guess today's "nature" on Nature Tales and Camera Trails is "human nature" ... in particular, the determination children have to take on a challenging task without question. This little boy I know is throwing a comparatively very large rock (of his own choosing) into New Brunswick's Bay of Fundy. This photo was taken at St. Martin's, NB.

Posted by: "Guest Blogger" Riel. Thanks to Watery Wednesday. The theme of Watery Wednesday is water, and for a wonderful variety of watery scenes from other bloggers around the world just click on its name!

For Mellow Yellow Monday ...
With up to 35 centimetres (13.78 inches) of snow forecast for our area overnight and into tomorrow, I thought I'd focus on the positive: Spring is coming. Eventually. In the meantime, I figured these colourful tulips were a hopeful reminder of what lies ahead. These photos were taken last year at the Ottawa Tulip Festival. 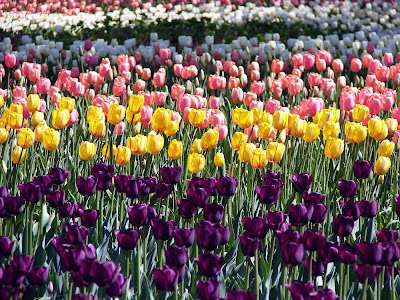 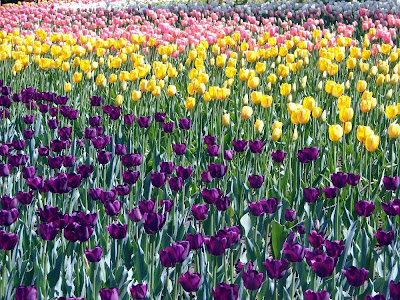 There really were tulips as far as you could see. Thousands and thousands. Very beautiful.
Posted by: "Guest Blogger" Riel. Thanks to Mellow Yellow Monday. To see more yellow themed photos from other bloggers, just click on the icon on the sidebar.

Common Goldeneye in the River

I saw some Common Goldeneye Ducks today in a section of open river near the Westfield, NB ferry crossing. I would say at least fifteen to twenty of them hastily retreated as soon as I got out of my car, even though I was far from the water. The distant duck in the first photo below (click to enlarge) was a bolder little fellow. This picture makes me think that he figured he and I were having some sort of standoff. He didn't fly away even though I know he saw me. I could feel his icy stare. Maybe he noticed that I didn't have my coat on and correctly guessed that I wouldn't last long in the blowing wind and freezing temperatures (perhaps that was the real cause of the icy feeling). I was just happy he stayed put so I could get his picture. I was also happy to get the other photo below. I don't have good luck getting bird photos because, well, they fly away, you know. 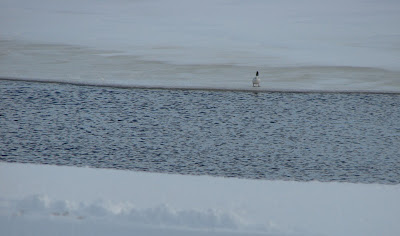 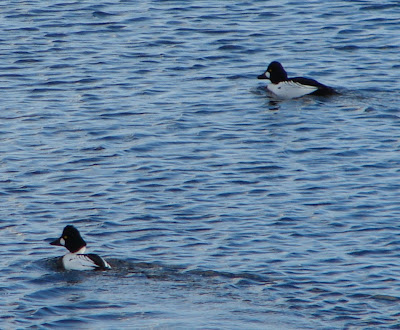 All Deer, All the Time 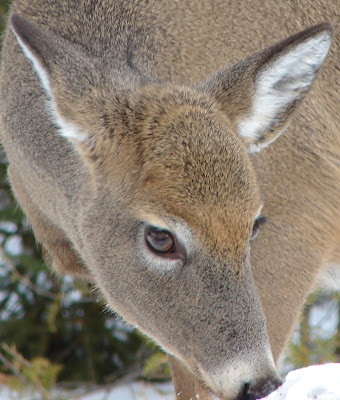 It really might just be "All Deer, All the Time" here on Nature Tales and Camera Trails -- at least for the next little while with me as guest blogger. Unlike my mother, I don't seem to have the ability to attract a variety of animals (rare or common) to within my camera's viewfinder. (Of course when I saw my first lynx outside of captivity last week, my camera was sitting safely at home beside the computer).

But I do see deer. Lots and lots of deer. Nearly every day. In fact, if for some reason in some alternate reality, anyone ever wanted to pay me an admission fee to drive around the Quispamsis and Saint John, New Brunswick area to see deer, I would be happy and confident to offer a 100% money-back guarantee if we didn't see any. 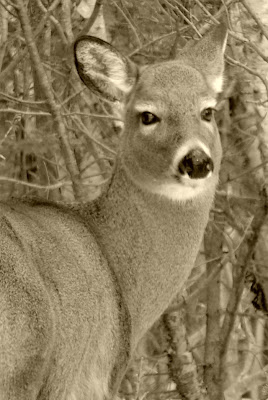 Anyway, yesterday I saw a mere eight deer -- two groups of four in two separate locations. I took these photos in the afternoon. These deer were in a wooded area not far from the UNBSJ campus. I had my camera as I was en route to a Doodlebops concert with my children (aged 3 and 1/2 and 1 and 1/2) ... but that is another story. I pulled the van over to the side of a one-way street exiting the university and took the photos. The deer didn't seem to mind. They also didn't seem to mind my son yelling out to them "We love you deer!" or his loud inquiries to me as to why none of the other cars going by were stopping to look at the deer or take pictures. (I suggested maybe they didn't have their cameras with them.) 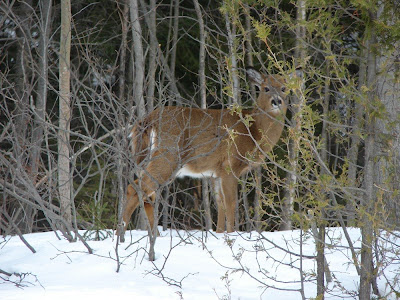 The deer were nibbling on cedar branches. The group of four deer I saw later in the evening were just out for a stroll in an open field, but it was too dark to take photos. 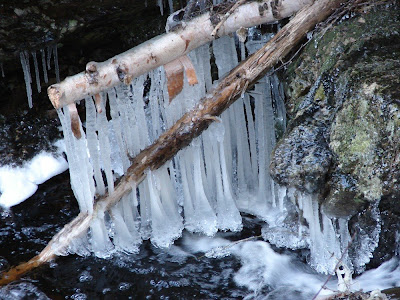 For lack of a better name I am calling these ice strands ... they delicately dangle off a birch log in a waterfall near Bloomfield, NB.

Note: This item is from the archives. It was first posted in early March, 2007 ... but I thought this unusual little guy deserved a second showing. Riel 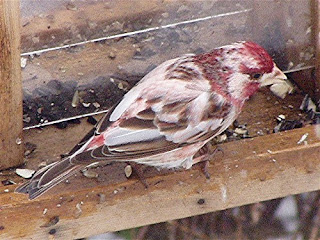 Spring is an exciting time of year and it's when I start anti- cipating the sighting of many different birds visiting our feeders. Sometimes, some with an unusual appearance show up; 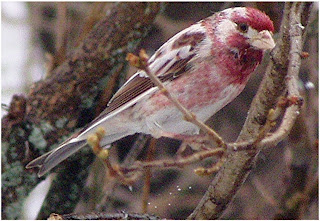 like this partially albino male Purple Finch shown here. This male bird has a jumbled up, patched sort of appearance with white feathers here and there, mixed in with its usual colouring. The male finch was photographed in our feeder area in April, 2005. 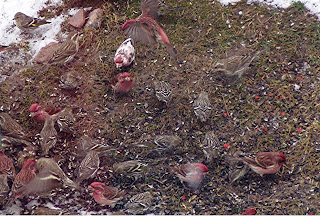 Notice how this partially albino finch stands out amongst the rest of the group while they are all feeding on the ground together.

Deer seem to make lots of appearances here on 'Nature Tales and Camera Trails' so I thought I would contribute a few photos of my own. In the town where I live I see deer several times a week -- either hanging out in the woods near our neighbourhood, walking around in someone's yard, or unfortunately, running across the street in front of me while I'm driving.
These photos are of a deer I saw relaxing in the afternoon sun in an area where a new subdivision is gradually being developed. (It is called 'Deerhaven Subdivision' which I must say seems like an oxymoron to me.) These photos were taken last year when the roads were first being cut in and lots of forest still remained. The deer didn't seem to mind me taking its photo. It didn't move at all. I think I may have interrupted its nap actually and it was just waiting patiently for me to leave so it could go back to sleep. 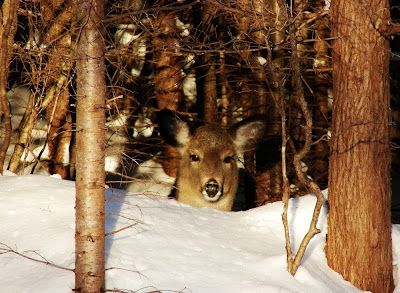 "If you don't mind, I'm not going to bother getting up." 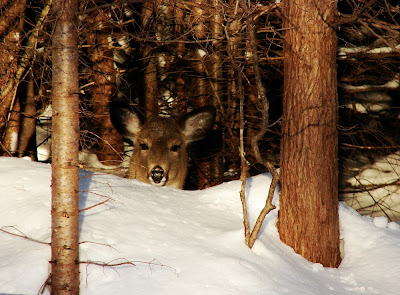 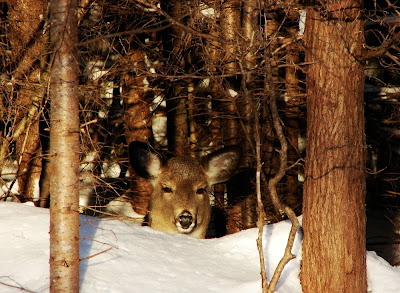 Note: This item is from the archives and was originally posted two years ago today, on February 11, 2007. 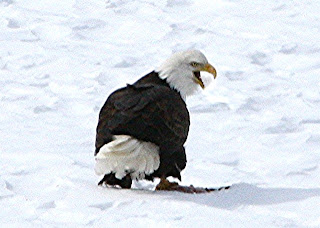 We saw this adult Bald Eagle feeding on the snow-covered, frozen Kenne- becasis on Friday. It was very watchful and wary as it fed, and perhaps it had reason to be, for as we watched, two Crows landed nearby the Eagle. 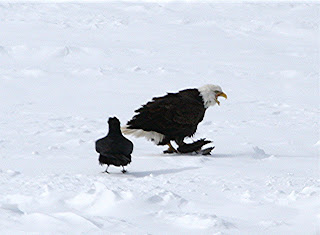 Then they kept getting closer and closer. One of the Crows would fly up close to the Eagle's left and annoy it as it fed. Then the Eagle flew a short distance away and landed once more to continue feeding. This pattern of annoyance and pursuit probably continued on more than the one time we viewed it, however after taking a few photos from our car, on the shoulder of the highway, we drove on.

To view a previous posting of interaction between an Eagle and a Crow go to: The Eagle and the Crow 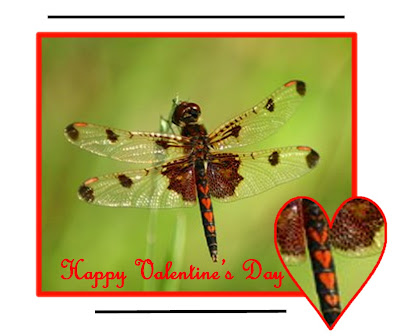 This beautiful Calico Pennant Dragonfly is always ready for Valentine's Day with its pattern of red hearts on its body.
Posted by: "Guest Blogger" Riel. Photo by: Me Ann My Camera.
Thanks to Ruby Tuesday. To view other Ruby Tuesday posts, just click the Ruby icon on the sidebar.

Wing Prints in the Snow 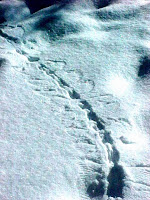 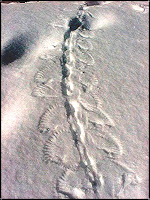 These wing prints are clues left behind in the snow, giving evidence of an untold story. Probably a hawk, after having landed in the snow, gave chase to an escaping prey.

Note: This item is from the archives. It was originally posted in February, 2007. I (Me Ann My Camera's Daughter) will be "Guest blogging" while Ann is in the hospital. She is doing well but does not have computer access (much to her chagrin). I will be reposting some "classics" and maybe occasionally daring to contribute a few photos of my own. 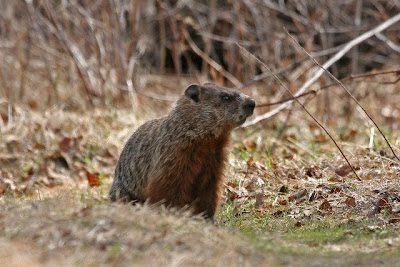 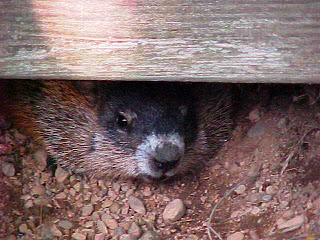 One thing I have definitely become aware of today; there are a lot of Groundhog celebrities out there! Here in New Brunswick many are curious to hear if Mactacaddy, of Mactaquac Provincial Park, will see his shadow? A Canadian Press newspaper story this morning tells us that Shubenacadie Sam in Nova Scotia had seen his shado w and so did Wiarton Willie of Wiraton, Ontario]
Both Sam and Willie are predicting six more weeks of wnter. 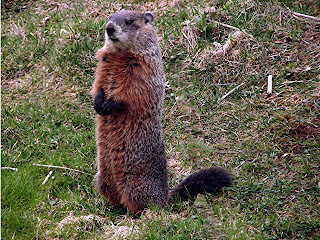 Another Canadian celebrity groundhog is Alberta's, Balzac Billy. I'm wondering if his will be a shadowy, or shadowless experience?

I'm all for the,"... didn't see its shadow" report, for I have had enough of winter. And as folklore has it, if the Groundhog doesn't see its shadow, then spring is just around the corner! If a shadow is seen, then we will have six more weeks of winter! I am also looking for reports from the south of us and wonder if Pennsylvanian's, Punxsutawney Phil or Malverne Mel of Western Long Island will see their shadows?! Apparently according to an early report today, PunxsutawneyPhil also saw his shadow this morning inPennsylvania an Phil is predicting six more wreeks o winter.

The Groundhogs pictured here are not famous. Barney, shown in the middle picture, once lived under a barn in Fredericton, New Brunswick and the other is one of our summer regulars. Thanks R., for sharing Barney's photo with us.

However, this Groundhog reporting is all in fun and for scientific weather reporting and predicting, be sure to check weather reports and predictions from your local weather departments. To see a longer list of famous Groundhogs, and to learn more of the origins of Groundhog Day in Canada and the United States: just click on the url below:
http://en.wikipedia.org/wiki/Groundhog_day