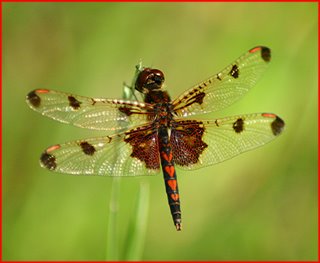 I have a favourite pond along a roadside that I stop by often. In the spring I watch for Ring-necked Ducks and in the summer, when the water level has dropped enough for an old discarded sofa to emerge, I watch Painted Turtles drowsing on the upturned side of it, luxuriating in the warmth of a bright, summer sun.

Today when I stopped by the pond I discovered two dragonflies that I had never seen before. One was most beautiful; a Calico Pennant! The design running down the length of the abdominal segments looked like little red hearts. I am forever fascinated with the intricate patterns and beauty of nature.

A second dragonfly that was also a new encounter 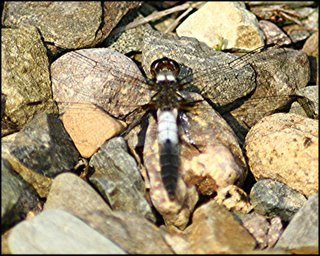 for me was a Chalk-fronted Corporal. The white markings on this dragonfly made it quite easy to find in my field guide book. There were several of these flying around and they landed only for a few seconds at a time on the rock-covered ground.

Also at the edge of the pond were a pair of Familar Bluet Damselflies. It was interesting to discover that the female of this species has tan markings in the same places that the male has blue markings.

Along the same highway is an old woods road in an area that has been clearcut. I often stop there as there are a couple of small water areas on either side of the road; not big enough to be ponds but just stagnant pools that seem to stay wet all summer. In this area I saw another dragonfly that I had not identified before. 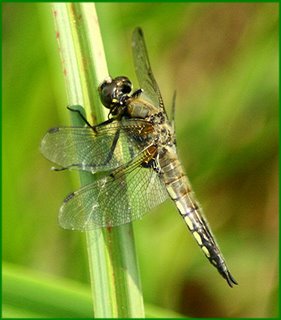 This dragonfly, pictured to the right, is a Four-spotted Skimmer. And I was delighted to discover that this was the same species as a dragonfly that I had taken a picture of last week but had not gotten around to id-ing it until today.