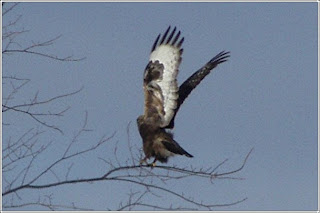 I recall the first time that we saw a dark morph Rough-legged Hawk; it was sometime in the early 2000's. We had been birding on the Tantramar Marshes, along the High Marsh Road, and we kept seeing Crows (or so we thought initially) that somewhat confused us a bit. These birds that we saw at a distance seemed to look like large Crows and they were black; but what mystified us was that whenever they were in flight we kept getting glimpses of white on their underwings! Luckily for us, later that day, along came a friendly birder and solved the mystery for us by introducing us to the species of the dark morph Rough-legged Hawk.
editing note: Other postings on Rough-legged Hawks can be found at:
http://naturetales.blogspot.com/2006/12/rough-legged-hawk.html
http://naturetales.blogspot.com/2008/01/rough-legged-hawk-at-maugerville.html