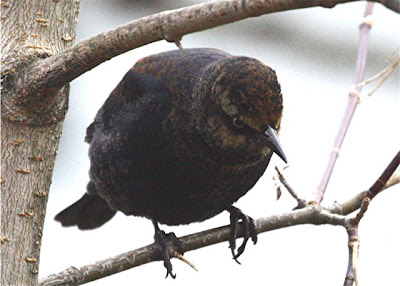 Its rusty mantle and light eyes led me to the identification of this blackbird as a Rusty Blackbird. Luckily for me this sighting was in the fall for it is then that the rusty tinge to the head, breast and back is more conspicuous. 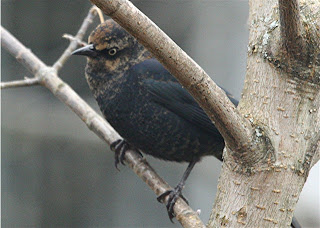 I also had two other birds to compare it with at the time, for a male Red-winged Blackbird had just flown into our feeder area and immediate -ly started feeding. It was then that I noticed the Rusty in the tree branches above and at first glance had kind of assumed it would be a female Red-winged Blackbird. Upon closer examination though, I ruled that out and began doing a bit of research as to its id. 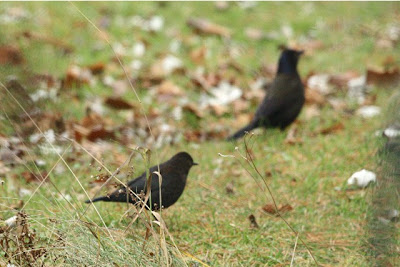 We also have had one lone Common Grackle hanging around for days now and the Rusty flew to the area where the Grackle was and began feeding there. The picture above allows for a shape and size comparison of the Rusty to the Grackle. The Rusty Blackbird is to the left. This was a first sighting for me of this species that is now in decline!

Thank you. Glad that I looked when I did!