Oh Dear, Deer On the Road! 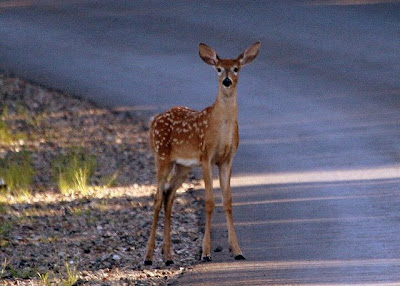 young fawn on the road
let me take you home with me
camera capture! 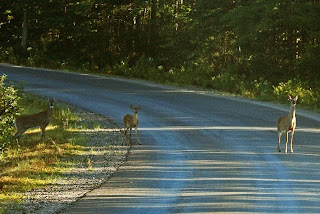 Its that time of year again when White-tailed Deer and their fawns start appearing on highways and along the roadsides. Yesterday morning I encountered these three as they were crossing the highway. They were difficult to see at first as there was poor lighting at this bend in the road with the contrast of bright sun and early 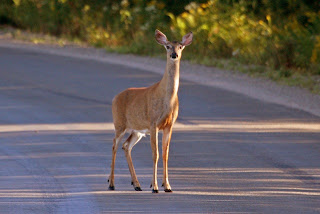 morning shadows. There were two adults and one fawn. One of the adults stayed in the middle of the road for some time, long enough for me to stop my vehicle and then pull off to the side of the road in a diagonal sort of roadside parking fashion. It was only after a bit more decision, and the approach of another car behind me, that the three decided to change their plans and hurry back towards the roadside bushes from where they had been coming from. 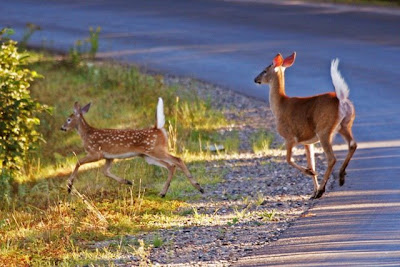 Beautiful shots. It's rather frightening to see them on the roads, both for deer and drivers. But it certainly gave you a great opportunity.

I agree with Bobbie...frightening for both deer and drivers. We have far too many deer in our city limits for their safety. I worry about my daughter driving to work in the pre-dawn hours now that deer are appearing on the roadways. I saw a young buck at the edge of the road yesterday morning. Great set of photos.

bobbie and ruth:
I agree with you both about the frightening aspect. It is too easy for one to suddenly appear at the edge of the road without you seeing it before hand. We have a great many deer in our area and yesterday, later in the day I saw another grouping of three again, this time it was an adult and two fawn. I am just leaving now to check on the Monarch butterfly cocoon and I will not be surprised to see to deer again this morning along my way.

While beautiful - so many of them die because they underestimate the speed of cars. At least these were safe!
Cheers, Klaus

Wonderful capture and how nice of him to just stand there and pose :-) The fawn is beautiful! I'm so glad they went back and didn't get hit! I passed a dead one at the roadside just a day ago. Bad time of year for both deer and drivers!

kjpweb:
The drivers in this area of rural roads are very used to them and hopefully are always on the look out for them. And I notice no matter how common they are, drivers most often slow down and look at their beauty, even if they are at a distance in a meadow.

mary:
This was on a secondary road which has very little traffic. The deer perhaps are more curious than afraid.

Oh, those deer. We have so many, I'm afraid to drive at dusk any more. There is a mom and 2 fawns close by, and I hope they remain safe.
Beautiful pictures.

becky:
I checked out your post for today; good luck with the monarch caterpillar you are raising! It shouldn't be long before it wraps itself up in a cocoon!

Oh, aren't they lovely but I am so worried driving on the highway when there are deers in the area. So dangerous for drivers and the deers too. Great shots Ann, as usual.

Those tranquil photos do belie the dangers to people and deer. Love your previous posts - congrats on a great capture of the vireo. And I think the monarch cocoon is just a gem-like as the butterfly!

It is a huge problem here and with terrible results. You have to be so careful when driving....

Nice pictures, we were going down the highway once and a deer ran out from the woods and jumped over the car in front of us and the car on the other side of the highway missed the deer, thank goodness.

From Florida to Indiana to Michigan, from Ontario and British Columbia to New York state and New Jersey, I think everyone has shared the same concerns as we have here in New Brunswick; that of the danger of deer on our roads and highways. Drive carefully everyone and keep a sharp eye out for wildlife. Thank you all for your comments; they are much appreciated.

These pictures are lovely to see but I agree is sad and scary when you see a deer on a busy road like I do sometimes and a friend just hit a young bear and it is devastating when you hit something wild and free that is not supposed to be on a highway..

island:
That is sad. In some areas of our province on some of the major highways we now have deer fencing along both sides of the highway to make driving conditions safer, especially at night. Moose are also a big hazard for drivers in our province. Too bad for your friend.

Their white tails are beautiful! Are these that same species of deer you photographed in your yard last winter?

I saw one yesterday standing on the railroad tracks. That is a scarely thought. Wondered what happened to it. I did not get a photograph of it.