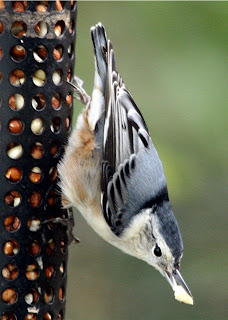 Its been quite a while now since I have seen a White-breasted Nuthatch in our bird feeder area. A first glance yesterday though told me we had a Nuthatch visitor when I noticed it feeding upside down on the peanut feeder. When I had first seen White-breasted Nuthatches several years ago, before I was a birder, I had assumed it was just a different looking Black-capped Chickadee. And I know others have made the same error too, for once when I had sent a picture of a White-breasted Nuthatch to a nonbirder friend; his response was that I had only sent him a picture of a Chickadee. No mistaking this species now though, no black on its throat or chin to be found anywhere, though both species wear a black cap. 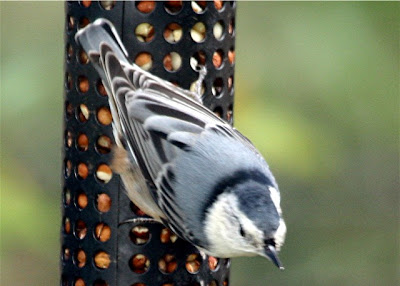