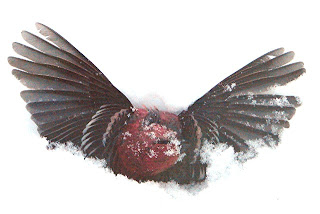 Yesterday morning, while in another part of my house, I heard a loud 'thud' and knew that a bird must have hit our window that looks out upon our feeder area. 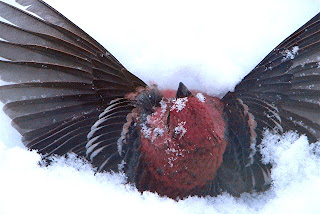 Sure enough, lying directly below the window, in the snow, was a male Pine Grosbeak. I thought for sure it had probably fatally injured itself for it appeared lifeless and its head was turned to the right in what appeared to 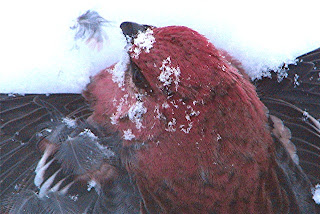 be an awkward angle. However, as I sat and watched, about four minutes later it stirred and turned its head, and then up righted itself so that its head was facing forward. I continued to watch and then wonderied if it had injured its wing, for although it was turning its head often, it had not moved its wings. It had hit the window at 8:24 am and stayed there in the snow, reviving and resting, for 27 minutes. It then suddenly lifted its wings, stood in the snow; and I shot the video below as it flew from its snowy location to a nearby branch.


This is a story with a happy ending and after perching on the branch for 15 minutes it then flew away with a small flock of Pine Grosbeaks that had suddenly appeared.
. 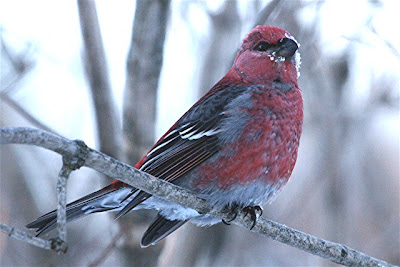 A great story with a happy ending, with pictures - who could want more?