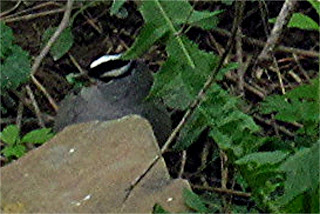 Its naming lies in the white stripes on its crown.  I sighted one in Bird Alley earlier this week and I was delighted.  This little migratory visitor doesn't drop by all that often.  I haven't seen one in my feeder area for the past two springs, so that is why its appearance was such a delight!My first sighting of it proved to be rather frustrating as it was very elusive, as soon as it appeared I was at the window with my camera and then it was gone as quickly as it appeared.  So scarce was its showing itself that my husband didn't see it until yesterday.  Today I was lucky.  It seems they  (I have discovered there are two of them)

have become more comfortable and adjusted to their surroundings,  Today I was able to take several pictures of them 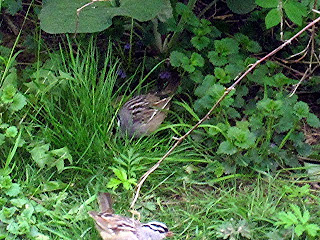 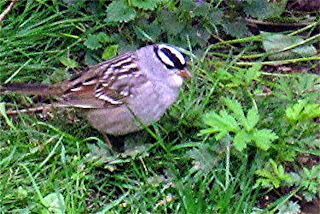 One must be careful not to confuse a White-crowned Sparrow with a White-throated Sparrow as seen in the picture below.  Both sparrow species have white stripes on their heads. The white-throated sparrow wears a white bib at its throat, thus its name; 'white-throated.  Also this species has yellow lores above its eyes at the beginning of two of its white stripes on its head.  The differences in their appearances is easy to note once you know what to look for. I am very happy that both sparrow species have made an appearance at our Bird Alley location this spring. 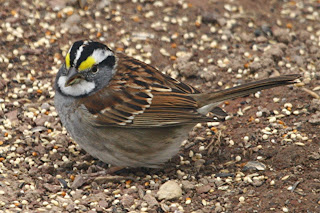 Camera Critters is a meme that features critters, any kind, any size. To see more of this meme please click on the CC logo which can be found on the right sidebar on this page or pleaseclick here.http://camera-critters.blogspot.com/

A Garden of Threads said...

Great shots, the white crowned has just arrived at our feeders this as well. Have a great weekend.

You got some great photos of it. I took some photos of one the other day but they turned out terrible. Now I'm jealous! :)

Thanks for explaining the difference between these two sparrows. Lovely photos!

Gardening in a Sandbox said...

My husband took a picture of the White Crown sparrow this morning. They have finally arrived for the summer. Thanks for sharing yours. Valerie

These guys stay in my area all year round ~~ but are ALWAYS a delight to see! Neat captures!!

I am anxiously waiting for the White-crowned to arrive here. Great post.
Blessings,ruth

I'm so happy that you posted this! I've been seeing white crowned sparrows this week and didn't know what they were. They are cute little guys, and very well behaved at the feeder (for a sparrow).

MY Maracas, I am so pleased that my post has helped you with their id. Thanks for mentioning it with your comment.They are delightful little birds. Ann

Prety shots of the White crowned Sparrow. A great yardbird.

Our sparrows (Australia) are very tiny and just tones of brown! So these touches of colour are quite extraordinary to see! Great shots!

Wonderful! Hope you get to see more of them.