Sometimes when I see something unusual and fascinating I must learn to take a picture first, no matter how far or distant it is, no matter of it turning out to be not such  a great picture.  Yesterday when I saw what appeared to be a ball of fur lying in the middle of the highway, I was curious!. That is when I should have tried for a picture!  I slowly eased  my car up until I was beside it.  The noise of my window going down was a turning point and a small, curious head appeared from the middle of the ball of fur!! What a delightful surprise that was! 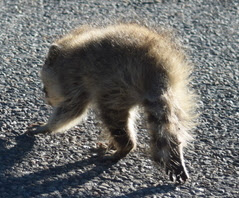 .  The animal quickly stood and made its way across the highway to the roadside grasses.  It was alone and as it walked I could detect a hesitation in its walk as if there was an injury to its legs.  It stopped and looked back at me in my car. 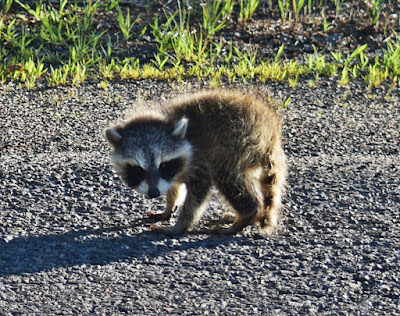 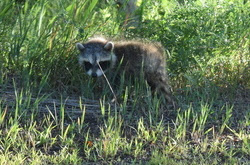 As it reached the roadside grasses it appeared to be more comfortable in its surroundings. This young raccoon had obviously lost its mother somehow.  I did not detect any evidence of an adult raccoon having perished on the highway.  Whatever had happened to it, it seems as if the young kit was waiting for it on the highway.  The life of nature's young is very precarious, be it danger of being hit while crossing s highway or the loss of its main food source,: its mother. I was glad that I had frightened it off the highway as the traffic there on a Saturday morning was fairly frequent and what a dangerous location the young raccoon had chosen to have a nap!
"Fair well little raccoon ", Maybe I shall frequent that area for the next few days to oust you from sleeping on the middle of the highway if I encounter such an action again.  Be safe and lets hope you and your momma are reunited again soon..

Aw, poor little sweetie. I hope it's mommy found it.