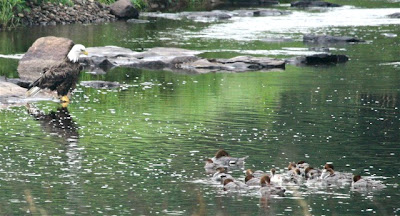 Yesterday morning, leaving home with only a pocket full of change, sans camera, I had gone to a few yard sales, but before returning home, the lure of the early morning river beckoned me to its shores. Upon arrival 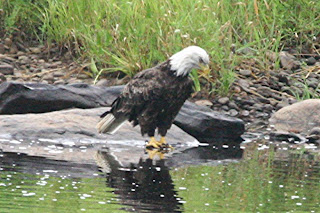 I immediately saw an American Eagle which had just landed on a rock in the middle of the river; and in the water adjacent to it was a group of Common Mergansers. Should I stay and watch; or take the chance that they would all stay in the same position while I quickly drove home to get my camera? These pictures included illustrate my decision. Having returning with my camera the Eagle and Mergansers were still there, still in the same 'freeze frame' positions. The Mergansers seemed huddled together with no noticeable activity while the Eagle stood surveying the scene. 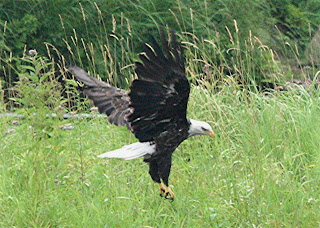 Then after a few more minutes, the Eagle left, flying around the bend of the river. Shortly after that the Mergansers activity suddenly became alive again, chasing each other and frolicking about as they often do. During my drive home I saw that the Eagle had perched in a tall stand of Pines further up the river. 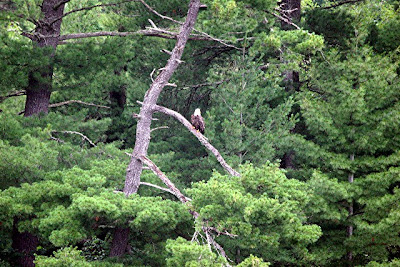