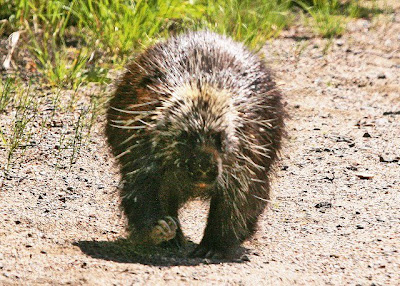 I used the exclamation mark in the title for I wanted to convey the excitement and surprise I felt when I saw this Porcupine ambling along the side of a woodland road. We had gone to the ocean for the day and my head was still full of tides and sand, and images of barnacles, periwinkles and gulls, and the least I had expected to add to my list for the day was a Porcupine, for I seldom see them. So to see one in open view, walking along the roadside was a treat! 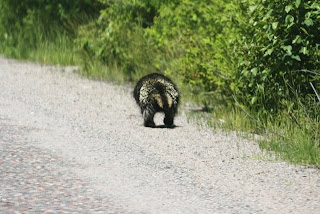 And the great thing about this sighting was that it continued on its walk even though we continued behind, following it while taking pictures through the windshield. 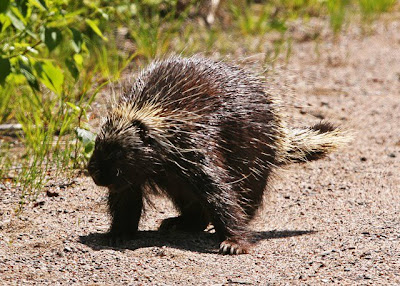 Would you believe that this solitary rodent is reputed to have about 30000 quills and can unleash some of them by lashing its tail when threatened? I kept that fact in mind as I drove ahead of it, further up the road, and then stopped to get more pictures as it continued up the road towards me. 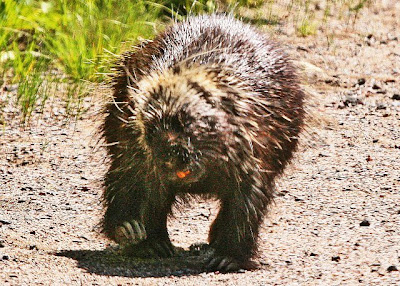 The Porcupine is Canada's second largest rodent, next in size to the Beaver. And like Beaver, Porcupines have a strong orange coating on the outside of their teeth and gnaw on things to help control the growth of their teeth as Beaver do. 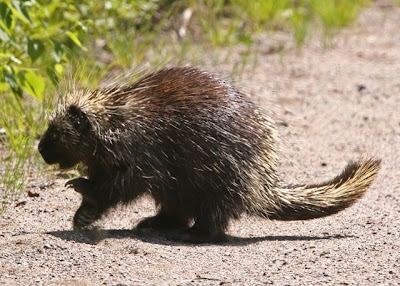 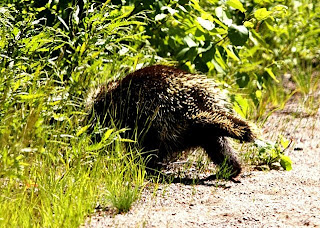 finally realized there was someone up ahead, standing in the road taking pictures of him, and he turned and ambled off into the woods.

"...taking pictures through the windshield." I guess so! I have never seen one in the wild and hope I do not come across one when I am out with our dog. Great pictures and an informative post. Have you seen quill boxes that are made by First Nations people? They are sold on Manitoulin Island and are very beautiful and pricey.

Wonderful pictures! You really got a lot of nice shots of him. What a wonderful opportunity and all the good information about these fascinating cratures. I can see those orange teeth in the one picture! I'm not sure I would have had the nerve to get out of the car around him :-)

ruth:
Having come through eleven kilometers of dirt road earlier did very little to enhance the view. And yes, I have seen porcupine quill work and it is beautiful.

bobbie:
I find these creatures so fascinating when you have a personal encounter; from a distance.

mary:
I NEVER get too close to a wild creature; but my telephoto lens does! :-) and cropping allows for you to get even closer at times. but me, as in this case, I am never far from my open car door.

ann
Another bit of luck for you! Great pictures. We have them in the area, but they seem to stay in the woods. Mostly we see them dead on the roads.

Amazing photos of the porcupine! I can imagine your excitement at seeing one. He walks as if he has an important appointment somewhere. I have a porcupine quill in my nature collection - it came from the nose of a neighbour's dog.

Oh, lucky you! Great photos and I'm enjoying the blog

WOW!!!!!! That's a fantastic sighting. I've never seen one before. Your pictures are incredible.

Wonderful pics! I've only seen one once up in the Adirondacks in upstate New York. It was more of a blur actually. A friend's dog got into it with the porcupine. It was not a pretty sight--the dog that is. I had no idea the quills glistened like that. What is the orange coating on their teeth?
--Curmudgeon

What a great spot, puts the mouse in my shed to shame, great post.

Now this is a creature I've never seen in my life - we get hedgehogs but a porcupine to a hedgehog is like an eagle to a sparrow.

Cute fella, you almost want to pick him up and give him a hug...Not!

Perhaps he wanted you to sign a release authorizing you to photograph his image...

Northwest Nature Nut and I saw a Badger on our trip to eastern Oregon and listed it just as you wrote Porcupine....with an Exclamation Point!
No photos, though....maybe next time.

Great captures! This is a close as I have ever been to a porcupine!WOW!

That was great! It must have been quite a rush to get those shots. I love stumbling on something like that.

Wow your so lucky! I would love to get a capture, like that!! :D

A great sighting (I've said before that you seem to attract these encounters!)
When we were near Ottawa we saw a Porcupine up a tree (like a Koala) and were very surprised....eventually it climbed down and padded away just like yours.
Thanks for the memory :-]

What a treat to have this experience and get all these shots!