Project Black Take Eight: As Black as the Inside of a Fox's Den 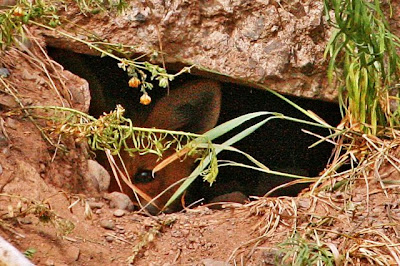 A neighbour dropped by the other day to tell me that there was a Red Fox with two kits in an old groundhog burrow down by the railroad tracks. It was just a short distance away so we went to have a look. We were curious for he had said he had seen the kits around the den opening. 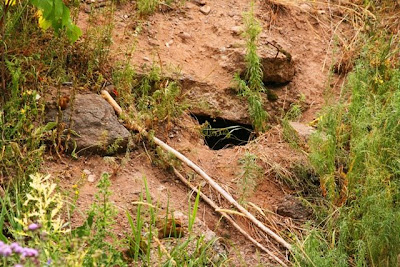 We went down by the tracks and located the den site. We didn't see any Fox or young kits playing outside around the den. After I was back home, downloading the pictures, words kept running through my head like " sly, crafty, wily "; and then on a hunch I zoomed in really close to the fox hole in one of my photos and lightened up the area. There it was!! Looking out at us from inside its den! 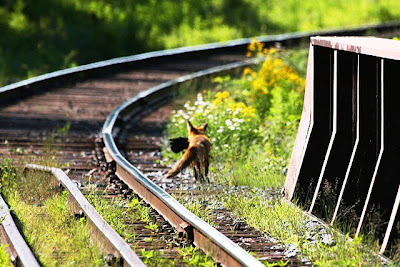 So, that would explain the several fox sightings I have been seeing lately! Earlier this week I had met the fox while walking down the tracks. It had been on the other side of the railroad bridge with a Crow in its mouth and it seemed to want to come across the bridge towards me but 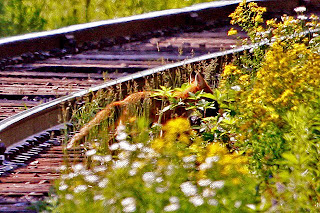 hesitated, changed its mind, and then ran away down the tracks and off into the brush at its side. I understand now that I had been between it and its young kits. It also explained the reason why the Fox kept running in the same direction diagonally parallel towards me the other evening as I watched it crossing through an open area down by the river. Its behaviour had kind of puzzled me as I knew it knew I was there as I stood on the hillside above the flat by the river. I realize now I had been standing only a few meters above its den. 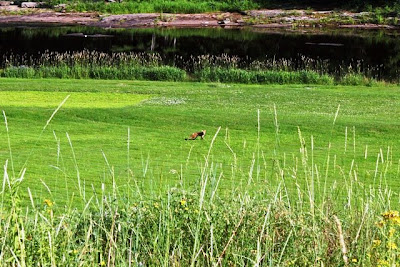 Well now, Mama Fox, don't worry about me. Now that I understand the situation I won't worry you any more and I'll make sure I keep my distance away from your precious young.
.
If you would like to know more about Project Black you can check it out at Anna's blog by clicking right HERE. You can also find lots of other interesting Project Black postings there too.

Nice post, just shows how hungry the fox I photographed must be to come so close.

mike:
I had thought of your great Fox photos on your blog when I put this post together.

How very lucky you were to double check your images. You never know what might be lurking in the background. Great post. Keep us posted on their growth. We don't have many foxes in our area, but they seem to be making a come back.
For them to catch a Crow must be quite a feat. Crows usually have a sentery on duty while the rest are feeding on the ground. Maybe this one was ill.

Wonderful gets...especially that first one!

That's really great that you can see the fox inside the den opening! Good photo and detective work. You are so good at following through and exploring a subject. I'm sure eventually you will show us the young kits, too :-)

Precious - especially the 1st one! Though getting the Fox with prey ain't too bad either! Great shots!
Cheers, Klaus

mary:
I loved finding that Fox in the shadows! I just hope I can be so lucky as to get pictures of the kits too.

klaus:
I opted not to include the close up of the Fox with the Crow in its mouth as some might be offended with the reality of it. Glad that you enjoyed.

Great that your camera saw what you couldn't see. And the picture is so good!

ruth:
I chuckled when I realized that it had been there peering out at me. One for the Fox!

These are wonderful! Beautiful fox pictures and it's a real treat to see the den up close like this, too.

My husband has seen a fox around here, but people get very concerned because of the rabies in New York State...Wonderful post and photos

Love the photos. Sometimes the camera doesn't see what the eye does. Interesting to turn that around.

Wonderful photos of the fox. One of my favorite animals.
Nice take on PB.

I'm so glad you zoomed in and found mama fox watching you from her den. I love that picture. Not a bit grainy either.