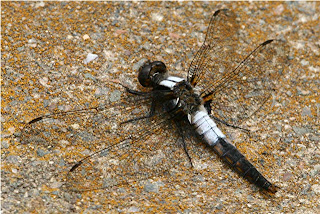 Ever fascinating and sometimes difficult to id , I am intrigued whenever I encounter dragonflies. I was fortunate yesterday when some kept landing on a cement water pipe just in front of where I was standing. There was a small pond on one side of a dirt road with a marshy area on the other and there was lots of dragonfly activity. The first dragonfly that I could identify was a male Chalk-fronted Corporal.

The second species that I was able to get pictures of was a Dot-tailed Whiteface. Marks which easily identifies this dragonfly are the bright yellow spot on the S7 segment of its abdomen and its white face. 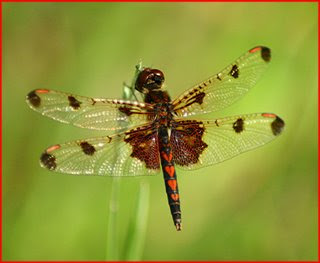 One of the most beautiful dragonflies that I have photographed was a Calico Pennant last year on June 19th.