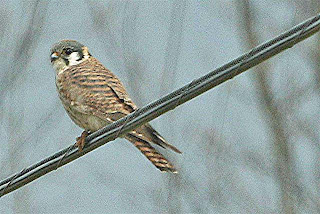 Its behaviour was as if it threw us a challenge.  "catch me if you can".  This little falcon, an American Kestral was perched characteristically on overhead wires which bordered an open field.   We had stopped our truck at our approach and as it became aware of our approaching presence, it would veer off in an arc, over the field and return to the wires again just a bit further distance from us.  It never flew far and continued to return to the wires each time.  If I opened the truck door the sound beeping that a door had opened would chase the Kestral off.. It is always difficult to get a picture of a Kestral, 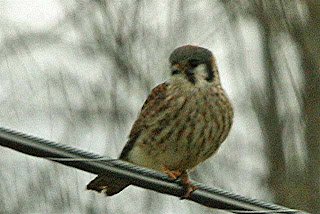 but one advantage is that they are fairly predictable and often remain in the same location where they are seen. We had seen this bird last week and we expected to see it in the same place today and we did!.  Hopefully I will get many more photos of this handsome little falcon as the season progresses.

He is handsome. A fun catch.

You have some wonderful pictures of this bird.Have fun trying to get more.I think a lot of the fun is in the trying,at least it is for me.A good shot now and then also helps.
Blessings,Ruth

Really nice shots in this post. I also admired some of your earlier posts.

I live in Brookville, Ohio and am an old man at 75 and have been married to the same lady for 55 years. Got 5 adult children, and three are past 50.

I began taking photos in 1953 when I was in the service stationed in Japan. I have been at it ever since.

My problem with digital images is that I can take 100 to 500 in one sitting trying to get that perfect image of a bird doing something nobody else has ever seen before. I think I got at least one.

This one shows a young grackle being fed and the youngster is showing his teeth.

Go to My Birds Blog to see it.

Thanks for the visit.

This made me laugh because I have chased the kestrel from spot to spot on the wires, too...with much poorer results! You got a couple of great photos!