Snapping Turtles are laying their eggs now for Camera Critters! 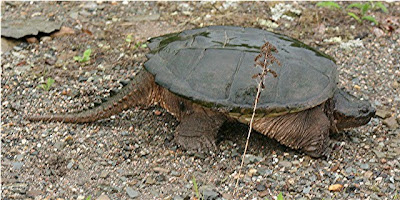 This snapping turtle above was seen near the south end of the highway bridge where it had completed its egg laying. 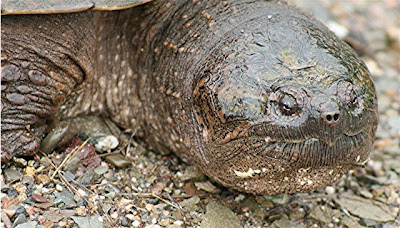 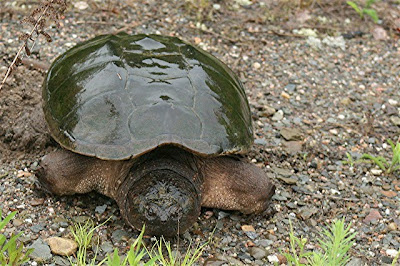 I didn't get to see it laying its eggs but I could see the place where the soil had been disturbed, churned over where this female probably deposited and buried her eggs.. Other years I have watched these huge reptiles laying their eggs along the railroad tracks and expect to see them at the same location this year. Perhaps some day next week. We have been monitoring this activity each June, since 2001. They seem to be early this year as I had assumed, as so much spring activity, returning migrating birds and early blossoming of wildflowers: all seem to be a bit ahead of schedule, so I am not surprised to see snapping turtles laying their eggs earlier either. It is usually in the late teens or 2o's of June that I usually see these turtles laying their eggs.

Above : the tail of a snapping turtle
Camera Critters is a meme that features critters, any kind, any size. To see more of this meme please click on the CC logo which can be found on the right sidebar on this page or please click here.http://camera-critters.blogspot.com/ 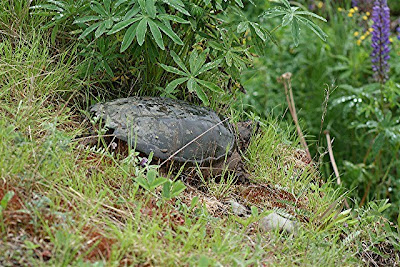 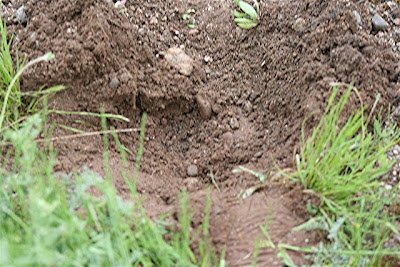 the location where we think it laid its eggs is seen above. Perhaps it will be returning back to the river soon. That is the pattern we have observed other years after the egg laying had been completed. I shall be looking for more snapping turtles in the same area tomorrow and expect that others will be found there. 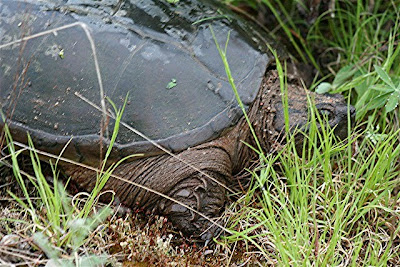 Above,This is the second snapping turtle we saw today and we assume it had laid its eggs from the disturbed signs in the soil near by.

Wonderful! Have you ever seen the little ones emerging?

If you would like to view the pictures and postthat I had posted when I did see baby turtles hatching in the fall of 2000 please go to: http://naturetales.blogspot.com/search?q=baby+turtles+hatching

Cool looking turtle, it even looks clean and shiny. The ones i see look like they crawl out of a mud bath. Hreat photo!

I hope another critter hasn't been watching her too. So many animals find turtle eggs tasty.

Thanks so much for the link to your 2008 pictures. I am enjoying them so much. I had even made a comment back then, and had forgotten.

Excellent detail in the photos. Defintiely not a candidate for Mary Kay products! rlr

great photos of the snapping turtle

awesome, i just love turtle even if they are snapping turtles

Interesting! And very good photos!! Hope the small ones will survive...

Wow, you never disappoint! It is amazing your timing to see them every year. It has to be a special gene you have, a turtle sixth sense ... I hope it was passed along to me. The pictures are super as always! Eli likes them too

Wonderful shots! Do you get to find the little ones later when they hatch? How long does hatching take? We saw a snapper laying eggs a couple weeks ago, and I would love to know when they hatch out, but I will probably never know. We went back a week later and could see the spot where she laid them.

Mary, from what we have observed the incubation period takes about 90 days (3 months)
Ann